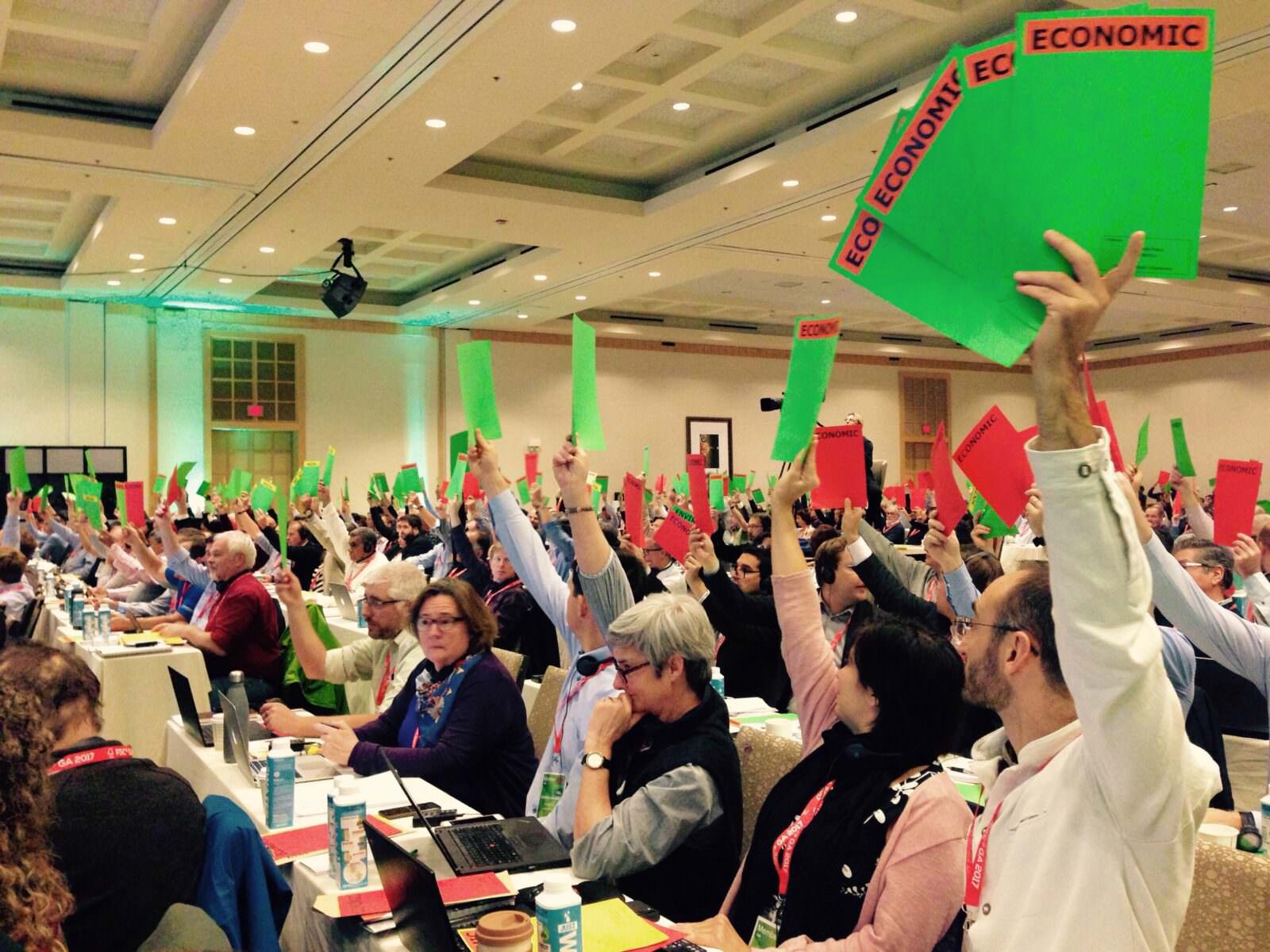 “The FSC General Assembly is now open,” pronounced Rulita Wijayaningdyah, Forest Stewardship Council (FSC) board chair on Thursday morning, October 12.  What followed were two days of a highly democratic process where the FSC membership representing the environmental, economic and social chambers voted on motions that will guide the FSC direction for the next three years.  What is perhaps less known, however, are the days preceding this opening proclamation when much hard work and long hours of negotiations are logged by each member of the three chambers, right up to the last moment before the General Assembly (GA) officially opened.

The 2017 Vancouver FSC GA was my first to attend, and after working in the FSC system for eight years it was incredibly rewarding.  I have often discussed with my peers in the conference circuit the value and reward such events bring to our work.  We return to our daily tasks charged with the energy that only a room full of dedicated sustainability professionals can generate.  Suddenly conserving biodiversity and ensuring sustainable livelihoods feels achievable again.  The FSC GA takes this energy to a whole new level.  Instead of rooms and panels full of the “like-minded” individuals found at most conferences, at the FSC GA you find passionate, diverse and divergent opinions.  All share the same goal of achieving the FSC mission, but many differ on how to get there.  The result?  A membership that challenges themselves to do better, to be better and to find the best path forward in achieving our shared mission.

As a first-time attendee, here are my observations:

The first three days are as important, if not more important, than the final two that are the actual GA.  Motions are submitted in advance of the GA, but they are anything but final at that stage.  The first days of the GA include a full agenda of side meetings as well as individual conversations to advocate, lobby and negotiate your priority motions, with the goal of gaining support from all three chambers.  Cases are made for and against individual motions, cross-chamber meetings, both formal and informal, are held multiple times a day, and the end result is a final list of motions that can sometimes be barely recognizable from their original form.  A motion that failed to gather enough cross-chamber support or did not manage to find the right language may be withdrawn all together.  This process takes place right up until the very last possible moment before the formal GA opens, building suspense and anticipation for the release of the final list.

We also experienced the reality that all organizations, even those founded on the best values, will make mistakes.  A shortcoming of the FSC GA became more and more evident throughout the week:  the lack of gender diversity. This included the choice of speakers during side meetings, the leaders recognized and awarded during the gala event, and the representatives during chamber meetings.  The “middle aged white man” joke that brought a chuckle early in the week quickly faded into a real concern for much of the membership.

Fortunately, this did not go unrecognized. The FSC Director General must have heard the whispers amongst the crowd, because he briefly addressed the concern during his remarks to the GA on the opening morning.  While highlighting the successful recruitment of three key senior positions at FSC International, Kim Carstenson acknowledged that these positions had indeed all been filled by men, likening the challenge to a game of “whack-a-mole,” where you solve one problem and another immediately pops up.  Carstenson also acknowledged the gender concerns from the GA agenda itself and promised to do better.  A short time after, member representatives stood to declare their support for gender equality within the FSC and asked those members in support to stand with them.  I am happy to report the majority of the 750 people in the room did stand, including the entire Rainforest Alliance delegation. (As a side note, the reasons that some delegates did not stand are known only to themselves.)

I departed my first FSC GA feeling re-energized and inspired to get back to my office and carry forth the important work of protecting our world’s forests.  But this is not the only take away. I also left feeling more connected to the membership: to the social chamber whose lives are arguably most impacted by the decisions taken at the GA; to the environmental chamber working diligently on fascinating projects to conserve, restore and protect forests; and to the many companies and certificate holders in the economic chamber that are committed to using their power for the good of us all.

Our Response to the EU Regulation on Deforestation-Free Products

Our Mission to Protect the World’s Forests

Shaping Human Rights and Environmental Policy for a Sustainable Future