An American contemporary artist, Alexis is known for his paintings of future landscapes depicting the impact of climate change, species extinction, and evolution influenced by genetic engineering. His work has been exhibited at the Brooklyn Museum and Smithsonian American Art Museum, as well as numerous galleries around the world, including Salon 94 and the Camden Art Center in London. In 2012, Rockman worked with Oscar-winning film director Ang Lee on watercolor concept paintings and visual sequences for the movie Life of Pi.

Born and raised in New York City, early influences on Rockman were the dioramas at the American Museum of Natural History, which he frequently visited with his mother, who worked for famed anthropologist Margaret Mead. Other influences include the Hudson River School; Rockman turned utopian American landscapes upside down by depicting apocalyptic landscapes or extinct ecosystems.

Many of Rockman’s works have also been inspired by his travels around the world to Costa Rica, Brazil, Madagascar, Guyana, Tasmania, Australia, and Antarctica. He often consults scientists, molecular biologists, and architects. He studied at the Rhode Island School of Design and received his BFA in Fine Arts at Manhattan’s School of Visual Arts. He lives in the West Village of New York City and works out of a studio in TriBeCa. 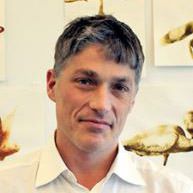