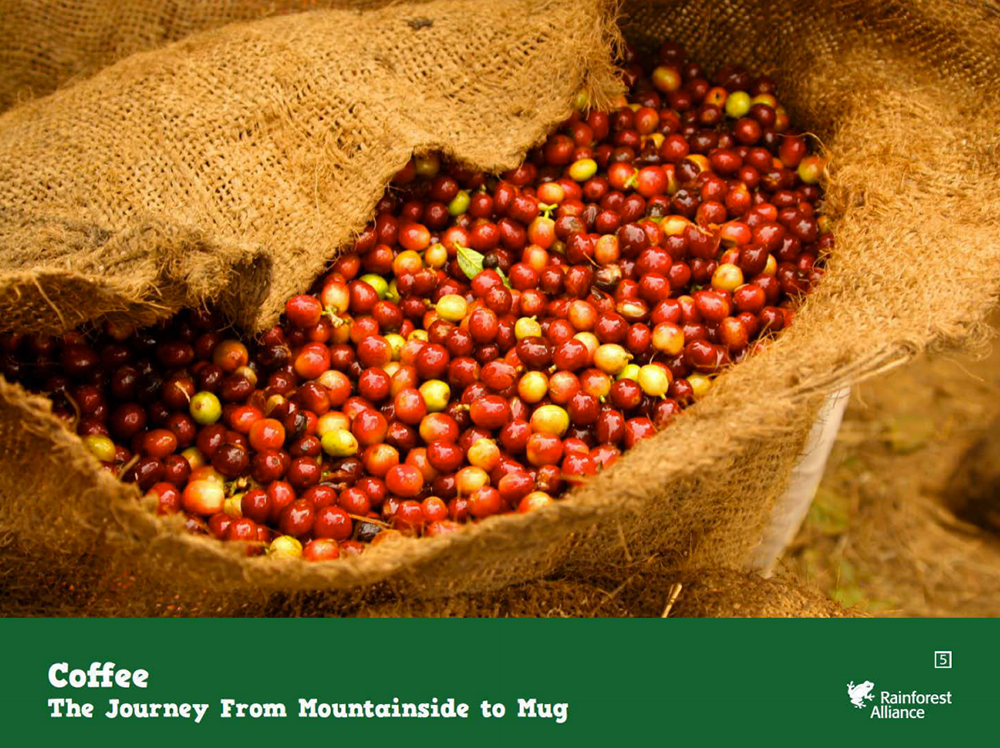 Coffee: The Journey From Mountainside to Mug

Where Does Coffee Come From?

Coffee grows on shrubs, bushes, or trees planted at high altitudes in rich, fertile soils with lots of rainfall. More than two thirds of the world’s coffee is grown in Latin America in countries with productive volcanic soils, like Brazil, Mexico, and Guatemala.

According to legend, coffee was first discovered around 800 A.D. by an Ethiopian goat herder. Noticing that his herd had a distinct boost in energy after munching on the red berries of a particular shrub, the goat herder tried them himself and discovered the energizing properties of coffee. It’s also believed that the first people to brew coffee cherries with hot water were monks who relied on the drink to help them stay awake for long hours of prayer and meditation.

Did you know that...

Though it can grow up to 30 ft tall in the wild, the coffee plant is considered to be a bush or shrub. The coffee plant is an evergreen, with a light gray bark and five-inch leaves that are dark green and glossy. Coffee flowers are small, white and fragrant, helping to attract pollinating insects. When the flowers fall off the plant, berries begin to develop in their place, ripening from a dark green to a bright crimson.

It takes 3–4 years for a coffee plant to begin producing “cherries” but coffee plants can survive over 100 years.

Two small green coffee beans, surrounded by skin and pulp, are found inside each cherry.

How coffee is processed determines taste and quality, which eventually determines the price. And now let us follow the journey of coffee from mountainside to mug.

Coffee is harvested during the dry season, when the cherries are most likely ripe. There are three ways to harvest coffee cherries: taking just the ripe cherries, taking everything and sorting later, or using a machine to comb the plants and pick the cherries.

Before coffee cherries can be pulped, they must be sorted by separating the “floaters” from the “sinkers.” Dense, ripened cherries will sink when placed in water and all other harvested material will float, so everything goes into a large vat.

Cherries are then placed in a pulping machine which forces the cherries through a mesh screen which removes the meat and skin of the fruit, revealing the seed which will later become the coffee bean.

Coffee is fermented in large tanks of water to remove the last traces of the fruit and pulp. Cherries must soak for between 12 to 48 hours and are then immediately dried.

Once coffee has been fermented, the beans must be dried. By forming long, narrow, shallow rows of beans in the sun, and turning them over every 30- to 40 minutes, the beans dry evenly and prevent any mildew from occurring.

After coffee has been sorted by size and density, it is packaged and shipped out to be roasted. Roasting is what determines the flavor and strength of the brewed coffee. Roasting is done in a large rotating drums at around 550° Fahrenheit. Roasting time varies from seven minutes for a light, American roast to 14 minutes for espresso.

Coffee and the Environment

Traditionally, coffee was grown in the shade of the rainforest canopy. Then farmers started “full sun” practices. By planting their coffee in cleared hillsides with an overabundance of sun, farmers were getting larger crops. But this “full sun” coffee required rainforests to be cut down and for farmers to use pesticides and fertilizers. The Rainforest Alliance works to encourage coffee farms to practice more sustainable, traditional “shade-grown” coffee.

Over 5 billion birds migrate from North America down to Central and South America to spend the winters. In recent years, due to deforestation, more and more birds are flying south only to find there’s no where for them to live! However, shade-grown coffee, which is incorporated into the rainforest canopy, can create the ideal “vacation home” for migrating birds. Not only is the habitat created by shade grown coffee good for birds, it also provides medicinal plants, construction materials, fruits and flowers.

The Rainforest Alliance works to certify sustainable coffee production throughout the globe. Through certification, an independent, third party awards a seal of approval guaranteeing consumers that the products they are buying are the result of practices carried out according to a specific set of criteria balancing ecological, economic and social considerations.

To be certified, coffee farmers must have a system that: