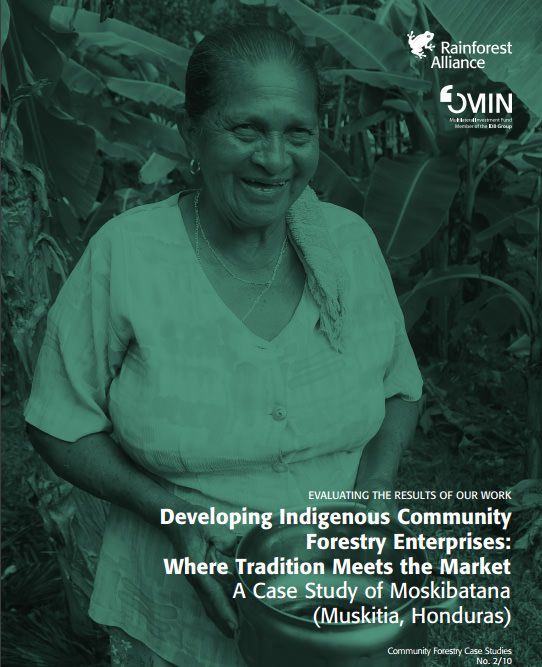 This report is the second of ten case studies produced as part of a community forestry project in Guatemala, Honduras, Mexico, Nicaragua, and Peru. The study chronicles work undertaken with indigenous Miskitu communities in the Kruta-Caratasca basin, at the extreme eastern tip of Honduras, to manage and market batana oil, a non-timber forest product that is harvested from the American palm.

The last two decades have seen a marked shift in tenure over tropical forests. Upwards of 30 percent of forests in the tropics are now under some form of local control (RRI 2012). This trend is taking hold as a result of a variety of factors—from wider shifts towards decentralized governance to a growing recognition that secure tenure is fundamental to protecting forests—and it is beginning to bring about the redress of indigenous claims to customary lands that in many cases have long been denied. The growing empirical evidence that indigenous and community forests can perform at least as well as strict protected areas when it comes to conserving forest (Porter-Bolland et al. 2012), and that managed forests can power economic development via locally driven enterprise (Radachowsky et al. 2012), is also helping to turn the tide.

While Honduras has allowed for the development of community-based forest concessions (called “agroforestry cooperatives”) since the 1970s, the country has only recently begun to recognize indigenous customary tenure with formal titles. After decades of antagonism between indigenous groups and the Honduran government, a period that produced negligible progress on tenure issues, the past few years have seen the first land titles in history issued to indigenous Miskitu groups. As of July 2014, some 970,000 hectares of land had been titled to seven indigenous territories, representing approximately seven percent of the country’s land area. With these titles in hand, a sizeable share of Honduras’ indigenous communities have secured an inalienable, permanent tenure base, setting the stage for formalized long-range forest management and enterprise development. Significantly, the foundation for the development of such enterprises is already in place in many cases.

This case study chronicles work undertaken with indigenous Miskitu communities in the Kruta-Caratasca basin, at the extreme eastern tip of Honduras, to manage and market batana oil, an NTFP that is harvested from the American palm (Elaeis oleifera) and used in the manufacture of hair care products. Working in close partnership with local Honduran NGO MOPAWI—which has been supporting Miskitu groups for more than 25 years—the Rainforest Alliance provided technical assistance to more than 2,000 producers in 40 communities over a period of four years. Among the considerable achievements that have resulted from this assistance are the certification of more than 55,000 hectares of forestland to Forest Stewardship Council (FSC) standards and the establishment of a multi-community enterprise, called Moskibatana, to improve and facilitate the production, processing and marketing of batana oil by its members.

The core finding of this case study is that indigenous Miskitu world view (“cosmo-visión” in Spanish) is not incompatible with enterprise development that is based on natural resource management. Processes that were undertaken to achieve FSC certification were driven by market logic and led to the mapping, documenting and, ultimately, legitimizing of indigenous management practices. Moreover, the founding of a local NTFP enterprise among Miskitu communities, which was also driven by a desire to develop local business capacities, demonstrates the ability to merge new business models with traditional institutions. As such, these efforts stand as an important model for other groups as land titling unfolds across the Muskitia. Furthermore, these findings have global relevance given the increasing number of indigenous groups in the tropics that are gaining control over ancestral lands that comprise resources suitable for enterprise development.