Home » In the Field » Building Cocoa Ambassadors: A Case Study on Youth Capacity-Building in Jembrana, Indonesia 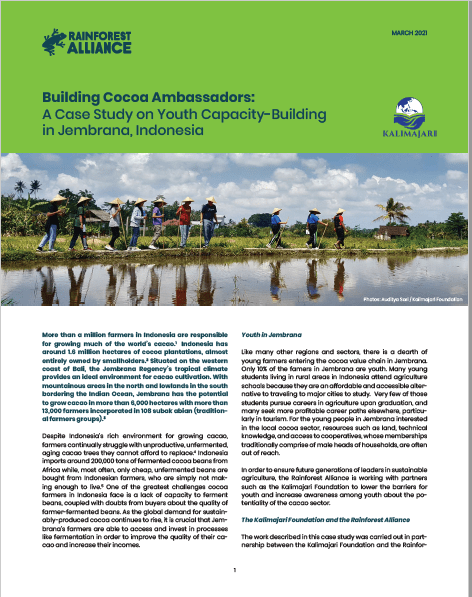 Like many other regions and sectors, there is a dearth of young farmers entering the cocoa value chain in Jembrana. Only 10% of the famers in Jembrana are youth. Many young students living in rural areas in Indonesia attend agriculture schools because they are an affordable and accessible alternative to traveling to major cities to study.  Very few of those students pursue careers in agriculture upon graduation, and many seek more profitable career paths elsewhere, particularly in tourism. For the young people in Jembrana interested in the local cocoa sector, resources such as land, technical knowledge, and access to cooperatives, whose memberships traditionally comprise of male heads of households, are often out of reach.

In order to ensure future generations of leaders in sustainable agriculture, the Rainforest Alliance is working with partners such as the Kalimajari Foundation to lower the barriers for youth and increase awareness among youth about the potentiality of the cacao sector.