One of the largest snakes in the world, the green anaconda can reach impressive proportions — over 30 feet (9.1 m) in length, 12 inches (30.5 cm) in diameter and more than 550 lbs (250 kg)! Unlike many animals, female anacondas are considerably larger than their male counterparts. Green anacondas are a dark olive-brown with large alternating black spots running down their backs and smaller oval spots with yellow centers along their sides. Their eyes and noses are perched on top of their large heads, allowing them to breathe and see their prey even when submerged in water. Green anacondas are members of the boa family and are a non-venomous snake. They use their teeth and powerful jaws to hold onto their prey while their extremely muscular bodies wrap around their catches to suffocate them or drag them underwater.

The green anaconda can be found in northern South America, Venezuela, Colombia, Ecuador, Brazil, northeast Peru, northern Bolivia, Guyana and Trinidad. Because of its large size, the green anaconda is cumbersome on land but stealthy in water. It spends most of its time underwater waiting for prey, but on occasion waits in the trees and drops down to surprise prey. Its preferred habitats are slow moving rivers, flooded forest floors and swamps.

Green anacondas feed on large rodents, deer, fish, peccaries, capybaras, tapirs, turtles, birds, dogs, sheep, aquatic reptiles like caiman, and even jaguars. After asphyxiating their prey, they are able to unhinge their jaws to swallow their prey head-first and whole, regardless of size. Their large meals can take time to digest, allowing them to go weeks or even months without feeding. Young anacondas feed on small rodents, chicks, frogs and fish.

At the top of the food chain, adult anacondas have no natural predators. The biggest threat to their survival is human fear; many anacondas are killed by people worried that the enormous snake will attack. They are also hunted for their skin, which is turned into leather or used as decoration. Deforestation and habitat loss are also a major threat. 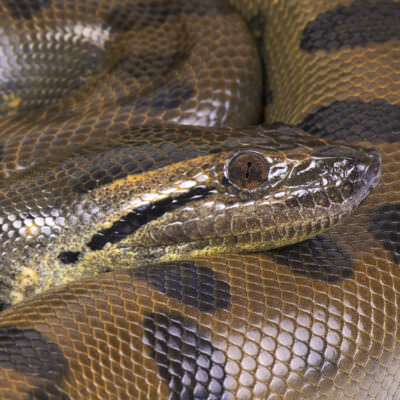