Mountain gorillas live primarily on the lush mountain sides of central Africa where, for many years, extensive human violence has destroyed the local environment, and consequently negatively impacted the lives of these primates. Today, mountain gorillas mostly live in national parks in Rwanda, Uganda and the Democratic Republic of Congo. Mountain gorillas live in groups of roughly 30, with one dominant, male troop leader called a ‘silverback’ for the silver tint in his coat. The dominant silverback is in charge of coordinating when the troop eats, rests and moves around the group’s home range, and the rest of the group is organized in a complex, evolved social order that points to mountain gorilla’s extraordinary intelligence.

Mountain gorillas are primarily herbivores and they eat large portions of over 100 different kinds of plants. They do not drink much water because they get most of their needed hydration from their constant consumption of plants.

The mountainside forests where mountain gorillas live are extremely rich in biodiversity, making them an ideal place to grow crops. This has led to extensive habitat loss and exposure to human violence and disease, both of which have a negative, and sometimes deadly, effect on these close cousins of human beings. Decades of war and civil unrest in Rwanda and the Democratic Republic of Congo have sent both refugees and rebels into the Virunga Mountains region, which is home to more than half of the mountain gorilla population. Due to these factors, a few decades ago, mountain gorillas seemed doomed to extinction. However conservation efforts over the last several years has brought hope to the future of these incredible creatures, though they continue to be critically endangered.

In captivity, mountain gorillas have been able to learn basic sign language! 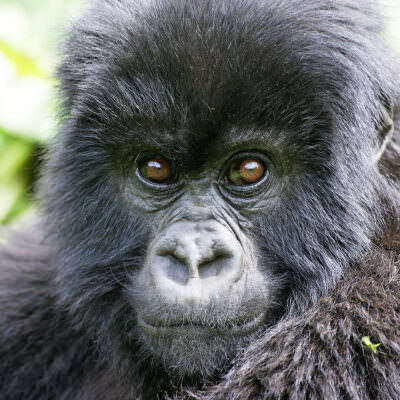 Mountain gorillas are the largest living primates on earth