Poison dart frogs are one of the planet’s most brightly colored animals. Depending on the species, they can be yellow, copper, gold, red, blue, green, black or a combination of those colors. Their showy colors and startling designs help warn predators of the danger they impose—a defense mechanism known as “aposematic coloration.” Within their skin, they store natural venom that can paralyze, or even kill, a predator. The Dendrobatidae family of frogs includes some of the world’s most toxic species. The golden poison dart frog, for example, contains enough poison to kill 10 adult men. Indigenous cultures, such as the Chocó people of Colombia, have used these frogs’ poison for centuries to coat the tip of their blow darts before hunting—a tradition that inspired the frogs’ common name. Despite their fearsome traits, they are relatively small and usually grow to be just one to two inches (2.5 to 5 cm) long.

Poison dart frogs can be found in the tropical rainforests of Central and South America. Unlike many other amphibians, poison dart frogs are diurnal. Most species are terrestrial but a few are arboreal.

Poison dart frogs are insectivores, preferring to eat ants and other small insects that they can hunt among the leaf litter of the forest floor. It is believed that the toxins in the frogs’ bodies may be related to the type and amount of insects that they consume.

Due to their toxicity, poison dart frogs have only one natural predator — the Leimadophis epinephelus, a species of snake that has developed a resistance to their venom. Far more detrimental to the species is the destruction of their habitat. Many poison dart frog species are facing a decline in numbers, and some have been classified as endangered due to the loss of their rainforest habitat.

Many species of poison dart frogs are very attentive parents. The females will lay 30 to 40 eggs encased in a jellylike substance on the forest floor. When they hatch, the tadpoles will squirm onto the parent’s back, where they will be safe from predators until the parents find a suitable small, safe pool of water for them to continue their metamorphosis. Often these parents choose the tiny pools of water held within bromeliads, and deposit a few tadpoles in each pool. Every few days, the female will return to these pools to deposit several infertile eggs which provide nutrition for the developing young, who reach their full size within two to three months. 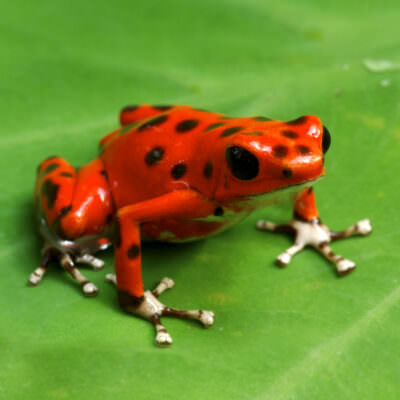 Indigenous cultures have used these frogs’ poison for centuries to coat the tip of their blow darts before hunting.