Home » In the Field » Forestry and Enterprise Development Among the Indigenous Mayangna of Awas Tingni, Nicaragua 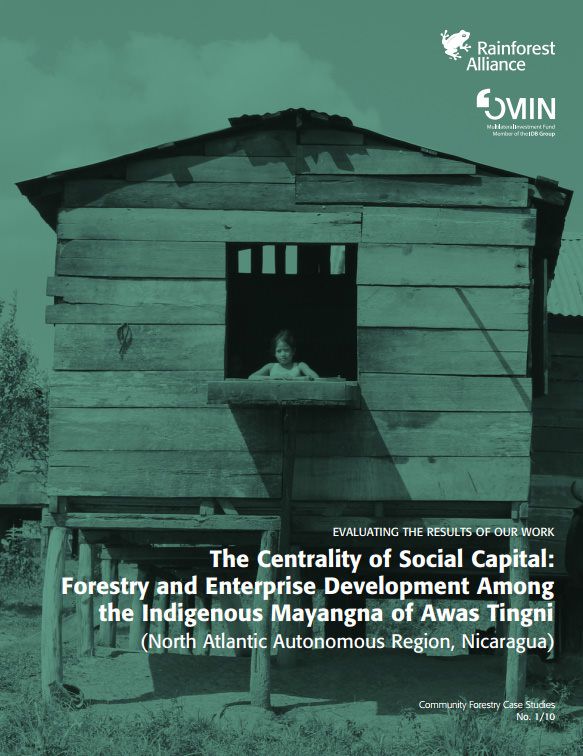 Forestry and Enterprise Development Among the Indigenous Mayangna of Awas Tingni, Nicaragua

This report is the first of ten case studies produced as part of a community forestry project in Guatemala, Honduras, Mexico, Nicaragua and Peru. The study focuses on the indigenous Mayangna of Awas Tingni, located in the North Atlantic Autonomous region of Nicaragua, an area where the Rainforest Alliance has been working since 2007. The Mayangna, who have legal tenure of their customary lands, have one of the longer histories of organized community forestry in Nicaragua, and this report examines the impact of indigenous land titling and other factors on the community's ability to establish a successful forestry enterprise.

Like many countries in the global south, Nicaragua is devolving control over forest resources to regional authorities and local communities. In the country’s Atlantic Coast region, which contains three-quarters of Nicaragua’s remaining natural forest, a process of indigenous land titling has been going on for more than five years. Given that most of the region’s land is forested and under some form of customary tenure, the devolution process has major implications for the future of the country’s forest resources. Indigenous land titling has set the stage for community-based forestry across a large area of natural forest. The changes underway are both regionally and internationally important.
To conserve forest resources, local communities must be able to make sustainable forest management a competitive land-use alternative. Therefore, it is of critical importance to improve local capacity for the development and management of community forest enterprise. The Rainforest Alliance works to improve the competitiveness of such enterprises by building local capacity for forest management, value-added production, business administration, financial management and market access.

The present case study focuses on the indigenous Mayangna community of Awas Tingni, which has one of the longer histories of organized community forestry in Nicaragua, predating the national land-titling policy by about 15 years. Since 2007, the Rainforest Alliance has been working in Awas Tingni to develop community forest enterprise—most recently with support from IDB/MIF. Given the nearly 20-year history of community-based efforts around forestry in Awas Tingni, the gathering pace of indigenous land titling throughout the region and the support of IDB/MIF, it is worth examining the major events, partnerships, outcomes and changes in enterprise organization and forestry operations within the community—particularly as other communities in Nicaragua and beyond are starting to establish their own forest enterprises.

The central finding of this case study is that a continuing lack of social cohesion threatens to undermine the potential for community forest enterprise development, despite the important progress that Awas Tingni has made in obtaining the rights to customary lands and improving certain enterprise metrics. It is urgent to address the core social and organizational issues discussed in this analysis if the community is to realize the full array of potential benefits that sustainable forestry and local enterprise can offer.