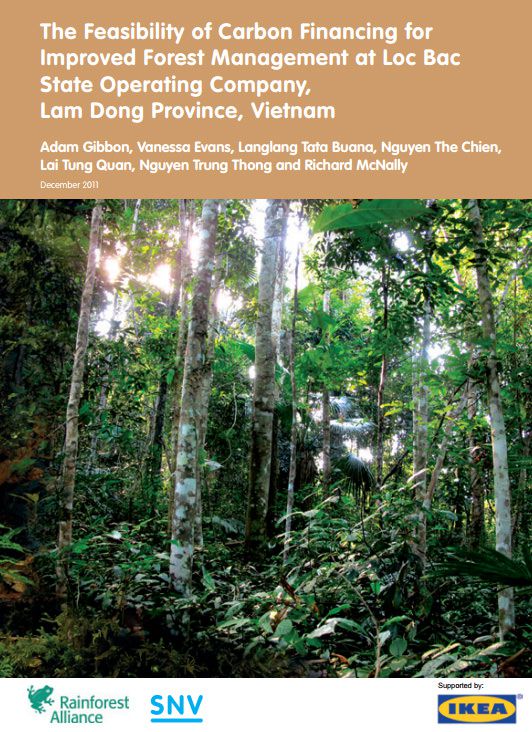 Loc Bac State Operating Company (SOC) manages 34,851 ha of broadleaf and conifer forest. They currently operate 25 year re-entry rotational harvesting on an area of 4,704 ha (an average of 134 ha yr-1). Current harvest levels and practices are heavy regulated by government decisions and quotas. The Loc Bac SOC is part of a continuous forest block stretching from the Cat Tien National Park to the Ta Dung National Reserve and contains High Conservation Value Forests that support ecological processes, such as hydrological systems and elevational migrations. There have previously been recommendations for this forest block to be protected on biodiversity conservation grounds (Dang and Osborn, 2004).

All project types were found to face barriers to implementation that could be used to demonstrate additionality. Current harvesting practices were already low impact and similar to RIL, thus there would not be significant improvements that could be made to reduce emissions. An analysis of LPtHP forests scenario was not possible due to a lack of information on the state of the low productivity forests. LtPF was found to be the project type with the highest potential, as all the emissions associated with the harvest could be avoided. Extending rotation length would generate around half the emissions reductions as complete protection, but would cost a similar amount to implement due to the fixed costs of planning and implementing a project. The baseline for LtPF was derived from a 35-year harvest plan that had been developed for the SOC. The biggest uncertainty with the baseline projection was the fact that landuse planning in Vietnam is done via a top down process, so the plan (made by the SOC), could be subject to change based on the quotas passed down to them.