Popular around the globe for their beauty and variety, orchids are the largest family of plants in the entire world. There are 25,000 – 30,000 different species of orchid, at least 10,000 of which can be found in the tropics. Orchid species can differ greatly from one another, with extreme variations in size, weight and color. While some orchids may only be the size of a nickel when in bloom, others may weigh up to one ton with petals as long as 30 inches, and sprays of small flowers 12 – 14 feet long. Orchid blossoms appear in almost every imaginable color except for true black.

In general, the floral arrangement of all orchid species is the same, with each orchid flower having six parts. The outer three flower parts are green “sepals,” and the inner three flower parts are beautifully colored “petals.” Some orchids live underground (subterranean), some grow on rocks (lithophytes), and some grow in the soil, but most are epiphytes, which means they grow on other plants and trees.

Orchids tend to obtain their nourishment from the air, rain or moisture in the soil. While some are self-pollinating, most rely on specific insects or birds for pollination. Another unique fact about the orchid is that the plant compensates for its lack of a true water-retentive root system by working with a certain type of fungi called mycorrhizae fungi during some portion of their life cycle. During this period, the fungi grow partly inside orchid roots, helping the plant to absorb water and minerals. The orchid “repays” the fungi by producing some nutrients during photosynthesis that help the fungi to survive. This kind of relationship, where two organisms help one another, is called a symbiotic relationship.

Orchids are extremely adaptable, and grow in almost all climates except for frigid and arid extremes. Orchid groups are both pantropical, able to grow in different tropical countries, and endemic, only found in specific countries or habitats. Most orchid species grow in tropical forests, but others can be found in semi-desert regions, near the seashore and in the tundra. The majority of neotropical orchid species can be found in southern Central America, northwest South America, and countries that lie along the Andes Mountains.

Because most orchids depend on a single species of bird, bee or other insect for pollination, if that species is eliminated, the particular orchid that depends on that species becomes threatened by extinction. Thus, habitat fragmentation and rainforest destruction may eventually prove devastating to the great number of orchid species in existence today. 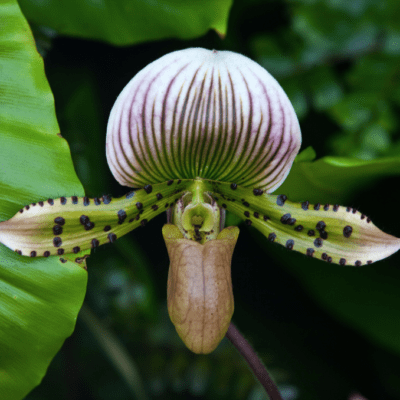 Fact Orchid blossoms appear in almost every imaginable color except for true black.