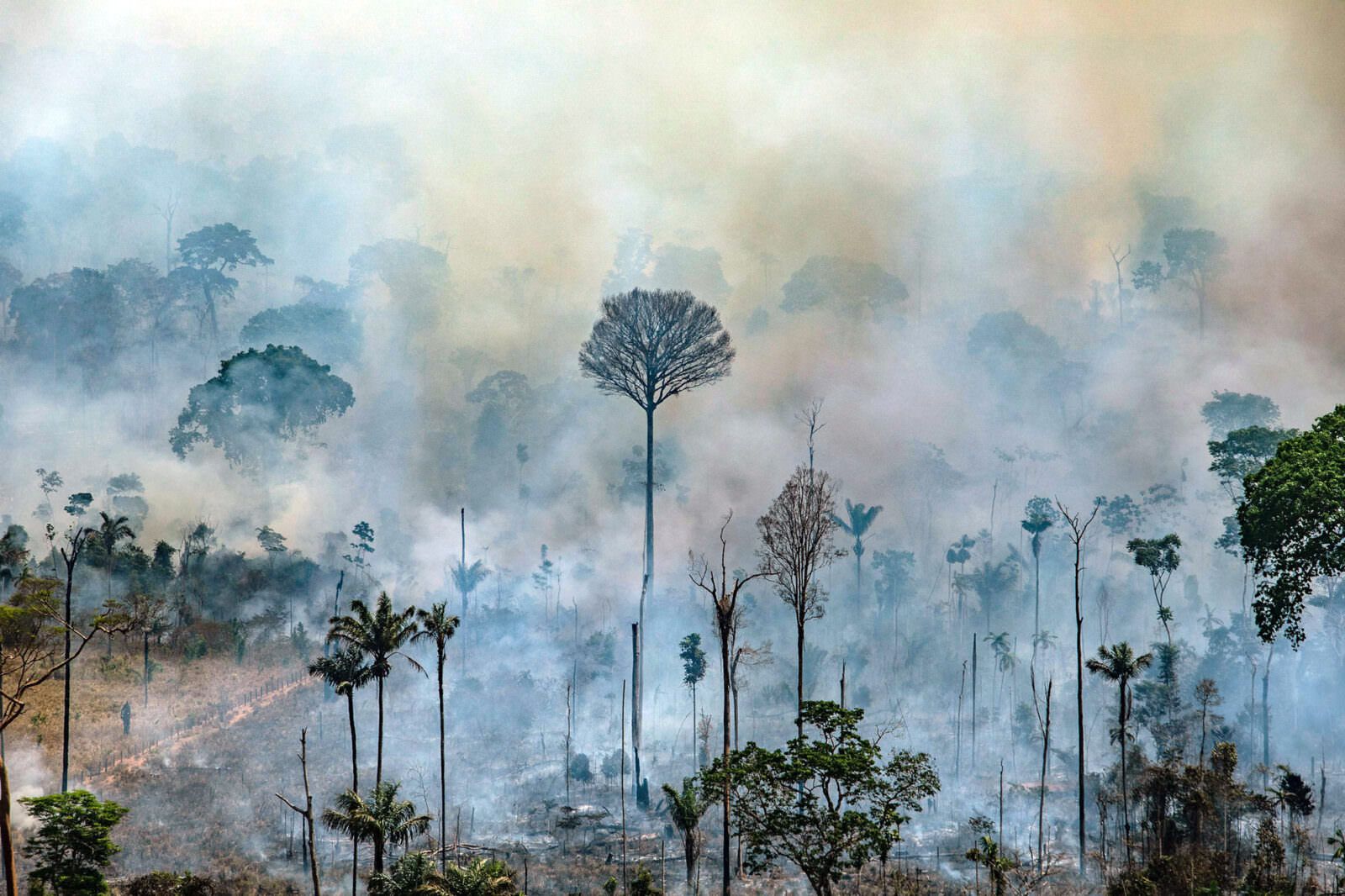 Aerial image of burning in the Jamanxim APA (Environmental Protection Area) in the city of Novo Progresso, Pará state, Brazil

Editor’s Note: The Amazon is still burning. As the fires rage on, an inspiring global mobilization has emerged in defense of one of Earth’s most precious and important ecosystems. A heartfelt thank you to those who helped us amplify the voices of Indigenous communities and frontline organizations courageously defending the rainforest. Together, we have raised more than US $1.2 million to date for frontline organizations across the Amazon; their crisis response activities are described below.

We sent the first disbursement of $500,000 in September to Instituto Clima e Sociedade, a foundation working with our frontline partners in Brazil to provide transparent administration of the grants. After receiving the first set of technical reports from the organizations on how they are using the funds, we are preparing to send the next disbursement within a week. We are also finalizing a similar mechanism to send funds to our five frontline partners working in other Amazon countries. It is important to note that all of our frontline partners have been operating in crisis mode for several months now—for this reason, it has taken some weeks for them to finalize plans for longer-term activities supported by these funds. We will continue to provide updates as we receive them.

The science is clear. Reckless land use is driving the Amazon rainforest to the brink of ecosystem collapse. Estimates vary, but some experts warn that an irreversible tipping point—marked by 20-25 per cent tree loss—could be as early as two to three years away. If this happens, the basin would lose its vital capacity to absorb and store carbon dioxide, triggering an unprecedented climate catastrophe.

That’s why we launched an emergency fundraiser in September for organizations on the front lines of the crisis. The groups we’ve partnered with for this crisis mobilization—six in Brazil, two in Peru, two in Colombia, and the Indigenous leadership federation that covers all 9 Amazon nations—constitute a new pan-Amazon alliance. Together, we are working shoulder-to-shoulder to develop and implement a coordinated response to this horrific disaster and its root cause—deforestation driven mainly by agriculture.

Following is a description of the work undertaken by our Amazon alliance to stop deforestation and prevent fires—supported by money raised via our viral Instagram crowdfunding campaign:

The state of Pará, in northern Brazil, has been especially hard hit by deforestation and fires set by farmers in support of President Bolsonaro’s directive to exploit the Amazon. Several of our frontline partners are focusing their efforts on expanding firefighting programs across this immense region, which is twice the size of France. In the southeastern municipality of São Félix do Xingu, our long-time partner, Imaflora, is equipping small farms with fire dampers and expanding its sustainable agriculture program, which provides farmer training on good land management practices that minimize fire risk. Imaflora is also developing training programs for 50 community fire brigades across the region.

Up north, in the Indigenous lands of the Xingu and Rio Negro river basins, civil society group Instituto Socioambiental is working to boost the combat capacity of local fire brigades in more than two dozen communities. The institute has also mapped out the use of firebreaks (aceiros), selective strips of land strategically cleared of vegetation to create fuel-free buffers to slow or even stop the spread of fire across the forest.

Since 1995, Brazilian environmental research organization Instituto de Pesquisa Ambiental da Amazônia (IPAM) has championed advances in science and technology for sustainable forest monitoring and management. IPAM has already developed an effective, web-based rapid response system that alerts Indigenous communities to threats to their land, including fire. Up until now, a lack of funding has restricted its availability in places where it is most needed. The emergency fund enables the team to introduce the system across Indigenous territories in the fire-prone states of Pará and Amazonas.

IPAM’s System for Observation and Monitoring of the Indigenous Amazon (SOMAI) collects real-time, geo-referenced data on fires, deforestation, drought, rainfall, and biodiversity. This technical data is then presented in a user-friendly way via a mobile app, Alerta Clima Indígena, that lets users zoom in on their own area and receive localized threat alerts directly on their phones.

The best way to protect the Amazon from burning is to prevent fires before they start. That’s why civil society group Instituto Homem e Meio Ambiente (IMAZON) is tackling this crisis at its source—land grabbing and deforestation. In Brazil, huge areas of pristine, publicly owned rainforest are being slashed and burned to make room for lucrative cattle pasture and cropland. More than 20 percent of the Amazon has already been destroyed, with the profits concentrated in the hands of a few. Meanwhile, municipalities that have experienced the most deforestation are among the poorest in the country.

IMAZON is campaigning nationally to unite environmentalists and responsible business leaders in the fight against public land theft and organized crime in the Amazon. Targeting agribusiness and journalists, the goal is to raise awareness of the negative socio-economic impacts of the land laws brought in by the current Bolsonaro administration—and to make the economic case for the sustainable development of Brazil’s natural resources.

The emergency fund supports Brazilian non-profit Projeto Saúde e Alegria (PSA) in expanding its successful sustainable forest management program in the Tapajós-Arapiús RESEX—a federal extractive reserve in western Pará. The 655,000-hectare reserve (1.6 million acres)—home to 13,000 people, including 26 Indigenous communities—was established in 1998 to protect the traditional livelihoods and cultures of its residents and ensure the sustainable use of its natural resources.

Sustainable forest management is our best long-term defense against deforestation and fires because it balances the needs of rural producers with forest conservation—now and for future generations. PSA is intensifying its forest restoration work and supporting the reserve’s community nursery and seed banks, which grow forest-friendly fruits and trees. Additionally, PSA will launch a fire-awareness campaign and build up a coordinated network of community fire brigades across the reserve.

Protecting the Rights of Indigenous Communities

The Rainforest Alliance has long worked to support—and learn from—the conservation leadership of Indigenous communities around the globe. Studies show that Indigenous peoples are the world’s best forest guardians—caring for an astonishing 80 percent of all biodiversity on Earth. In the Amazon, deforestation rates inside tenured Indigenous forestlands have been shown to be two to three times lower than outside of them.

COIAB—the umbrella federation of Indigenous communities in the Brazilian Amazon—has been mobilizing its members in five key territories: Tocatins, Mato Grosso do Sul, Rondônia, Acre, and Amazonas. The Indigenous communities across these lands are uniquely adept in using their traditional knowledge to prevent and manage forest fires. The emergency fund supports the scaling up of their emergency actions by supplying essential fire combat resources, such as firefighting equipment, protective clothing, and all-terrain vehicles—as well as urgent logistical and security considerations for Indigenous community leaders.

Beyond Brazil: Protecting the World’s Rainforests

The horrific fires across the Amazon have alerted the world to the accelerated destruction of our rainforests—and how the consequences of this destruction will affect every last one of us. The crisis is a timely, if harrowing, reminder that we must work together to keep our forests standing in every corner of the Earth.

In September, we expanded our emergency fundraiser to include partners working in all nine countries that share the Amazon basin. In addition to the Brazilian projects outlined above, the emergency fund will support the critical work of COICA—the pan-Amazon federation of Indigenous leaders—as well as DAR Perú and Aidesep Pueblos Indígenas in Peru, and OPIAC and Fundación para la Conservación y el Desarrollo Sostenible in Colombia.

Our mission to stop tropical deforestation continues not just in the Amazon but in the rainforests of West Africa, the Congo Basin, Meso-America, and southeast Asia. We remain focused on working with farmers and forest communities to build sustainable rural economies—the most effective, proven, long-term approach to preventing deforestation and fires.