Home » In the Field » The Beauty of Connection: Lessons from a Temperate Rainforest

The Beauty of Connection: Lessons from a Temperate Rainforest

by Patrick Floyd, Rainforest Alliance Filed Under: In the Field
Last updated September 25, 2018 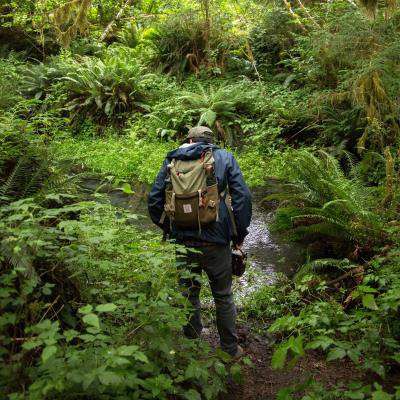 “There are no individuals in the forest, no separable events. The bird and the branch it sits on are a joint thing. Even different kinds of trees form partnerships. Cut down a birch, and a nearby Douglas fir may suffer…” — Richard Powers, The Understory

Nothing could have prepared me for my first moments in a rainforest. Centuries-year-old trees towered above, vibrant green moss draped every branch, and the calming silence was punctuated only by the occasional sound of water dripping from the canopy. Even more moving was knowing that all around me, trees and plants and wildlife were communicating with one another, as they have been for millennia.

You may assume I’m describing wonders found deep in the Amazon Basin—especially since I work for the Rainforest Alliance, whose now-global work began more than 30 years ago near the cloud forests of Costa Rica. But the magical place I’m describing, the Hoh Rain Forest, sits in Olympic National Park in the United States’ Pacific Northwest.

I first visited the Hoh Rain Forest on a post-college road trip, and I immediately vowed to go back as often as I could. In fact, Seattle’s proximity to the majestic Olympic Peninsula was one reason I decided to move to the “Emerald City” just months after that first visit. I could hop on a ferry to cross the picturesque Puget Sound and then drive three hours on US Route 101, past postcard-perfect glacial lakes and through former logging towns (one of which served as the setting for the Twilight movies). Then, turning off 101 onto the Upper Hoh Road, I would soon find myself in one of the largest remaining stands of old-growth forest in the continental United States.

It’s hard to say which is more breath-taking, the stunning beauty of the Hoh Rain Forest or the awe-inspiring feeling of timelessness you get when you’re there—or maybe the amazing efficiency of nature when it’s left to its own devices. The Hoh Rain Forest sits in a deep valley carved by glaciers thousands of years ago, and the surrounding Olympic mountain range acts as a funnel, providing the rainforest with up to 170 inches of precipitation per year. (To compare, the drizzly city of Seattle gets 37 inches of annual rainfall.) All that moisture reduces the threat of wildfires, and the steep mountains protect the area from windstorms that ravage most coastal forests—together setting the perfect stage on which this ancient forest thrives.

Here are some sights from my most recent trip to the Hoh Rain Forest.

When you enter the Hoh, your view is dominated by immense Sitka spruce and western hemlock trees rising from the ground. Sitka spruce bark has the appearance of wide shingles, while western hemlock has thinner strips of bark (not as craggy as the deep Douglas fir). These giants can rise hundreds of feet into the air, but a thick layer of moss covering the soil makes seed germination on the forest floor next to impossible. How then, do the trees propagate so beautifully? Walk a bit further into the forest and you’ll find the answer.

When a tree falls in the Hoh, it provides an ideal environment for new growth. Seedlings unable to take root in the crowded forest floor seize the opportunity to be “nursed” by the fallen trunk. As the “nurse log” slowly decomposes, it unlocks minerals, moisture, and warmth for the young trees, only a few of which will succeed in eventually putting roots into the ground. While hiking on trails in the forest, whether the crowded (for good reason) Hall of Mosses path, the short and scenic Spruce Nature Trail, or the extended Hoh River Trail, you’ll see fallen nurse logs giving life to seedlings everywhere you look.

Many decades later, after the nurse log has decomposed, the surviving trees stand in a row known as a “colonnade,” an architectural term for a long sequence of columns. The roots of these columns seem to stand on stilts around the ghost of the vanished nurse log— truly an amazing sight to see.

In addition to nursing new trees, the many fallen logs on the forest floor give plenty of life to other inhabitants of the forest. Over the course of decades, beetles, termites, and ants will feast upon the remnants of the log, helping to return its nutrients to the soil. Some studies estimate that decomposing logs provide the forest soil here with up to a third of its much-needed nitrogen — a critical ingredient in chlorophyll, the chemical that enables photosynthesis to occur.

One of the first things you’ll notice on a hike through the Hoh Rain Forest is the moss, lichen, and other epiphytes that seem to cover every surface with a soft, almost furry blanket. These beauties perform many helpful tasks like aiding in photosynthesis, filtering a nutrient-rich brew of “through-fall” moisture that feeds forest plants, and serving as a nutritious snack to foraging elk and deer.

Olympic National Park is home to the largest unmanaged herd of Roosevelt elk in the Pacific Northwest. The elk not only rely on the park’s temperate rainforests for food, but they also play a role in shaping the forest health and character. “Exclosure” studies in the Hoh Valley have shown that when elk are kept out, the forest floor becomes an unkempt jungle, whereas when elk are able to roam and feed, they give the forest its signature park-like character. More importantly, the decades-long study showed that more species grow where elk are present than within the area where the elk weren’t allowed to browse and trample. (Note: The figure in the photo below is not an elk, it’s me, keeping an eye out for a Roosevelt bull, which can weigh more than 1,000 pounds and boast four-foot-long antlers. Hikers are definitely discouraged from engaging with these massive creatures.)

More than 430 species of birds, mammals, amphibians, reptiles, and fish share the Olympic Peninsula with the elk—and they all rely on a healthy forest ecosystem. On my most recent trip to the national park this summer, three Olympic black bears—a mama and two tiny cubs—wandered down a coastal hiking trail looking for food. We watched in awe from a safe distance. If you don’t want to mess with elk, you really don’t want to mess with a mama bear.

The health and beauty of the Hoh Rain Forest arise from the immensely complex web of interdependence that sustains this truly awe-inspiring ecosystem. This is a lesson from nature that we at the Rainforest Alliance take to heart: We base all our work in the knowledge everything is connected, and that therefore, protecting forests and improving the livelihoods of rural people—from the Amazon to Indonesia, the Appalachians to the Ivory Coast—benefits us all.

Oh, and me? I eventually left the west coast for the urban jungle of New York City (and a job at the Rainforest Alliance), but not before proposing to my then-girlfriend in—you guessed it—the wilds of the Olympic Peninsula. What better place to start a life together, where nature puts the beauty of connection on full display?

Patrick Floyd has been a graphic designer at the Rainforest Alliance since 2012. He also runs our Instagram, so follow us and say hello!