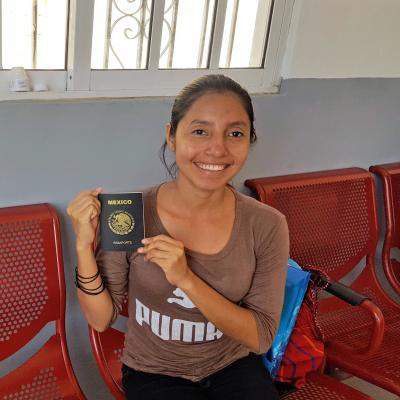 When 16-year-old Carmelina Martínez Hernández signed on to participate in a Rainforest Alliance youth program in 2016, she knew little about the magnificent forests of Mexico’s Calakmul Biosphere Reserve, even though she had spent her whole life just a few miles from them. But the program’s many field trips, expert visits, and workshops ignited a new passion in Martínez—and before long she had become a fearless advocate for her community and its forests.

Now 19, Martínez is poised to unleash that passion on a broader scale. After a rigorous application process, she recently won admission to Costa Rica’s highly selective EARTH University, where she and her 101 classmates (chosen from 1,200 applicants) are embarking on a four-year degree program that will give them expertise in sustainable development to take back to their home communities. Martínez also won a generous scholarship from the W.K. Kellogg Foundation to support her studies, which will culminate in a degree in agricultural science.

Martínez, who is the first in her family to go to college, says she plans to use what she learns at EARTH University to “help my family and my community. I want to develop projects focused on conservation and sustainable production that create a balance between human beings and nature.”

Rainforest Alliance manager of Youth Inclusion Maria Ghiso said she is not surprised at how far Martínez has come. “Our Forest, Our Future”, the Rainforest Alliance program that Martínez participated in, was designed to encourage youth participation and employment in the Calakmul area, since young people often migrate out to find work in urban areas, leaving the precious local forests without the youthful energy and innovation needed to protect them. The program’s original core group of 20 took more than 200 hours of community forestry workshops, during which they met industry experts and learned about various work opportunities, from established jobs in sustainable forestry to potential roles suited to young adults, like technology and social media. Ghiso said Martínez was a standout student from the start, even speaking before a crowd of more 300 nonprofit, government, and education leaders about the importance of involving youth in forest conservation—this from a teenager who hadn’t even walked through a forest until a few months earlier.

“The forest is a privilege—it’s unique and it’s also something that makes me unique.”

“Even though I lived my whole life in a community within the forest, the forest didn’t mean anything to me,” Martínez recalls. “But when I signed up for the Rainforest Alliance program, I learned that the forest is a privilege—it’s unique and it’s also something that makes me unique. I need to take care of the forest because all of us depend on it to live.”

Leaving her home in southern Mexico to pursue a degree in Costa Rica was a big deal not just for Martínez but for her whole community. Manuel Villalobos, the principal of her high school, helped Martínez figure out her paperwork for getting a passport and drove her to the airport the day she left for Costa Rica. After a couple weeks there, Martínez said that while she missed her family, she’d already found another kind of family at EARTH University—one based on a mutual passion for conservation and community well-being. “I feel so privileged to be here. In my community, young people like me don’t have the resources to go to college.”

Martínez is enjoying her time at EARTH University, but she keeps her eye trained on the future, when she can apply her education to helping her community back home in Mexico. “I want to continue developing my knowledge of natural resource management and balancing the health of the ecosystem with the health of the communities,” she said. “The forest gives us everything we need—but only if we use it sustainably.”