The Future of Farming Begins with Young Farmers in Kenya 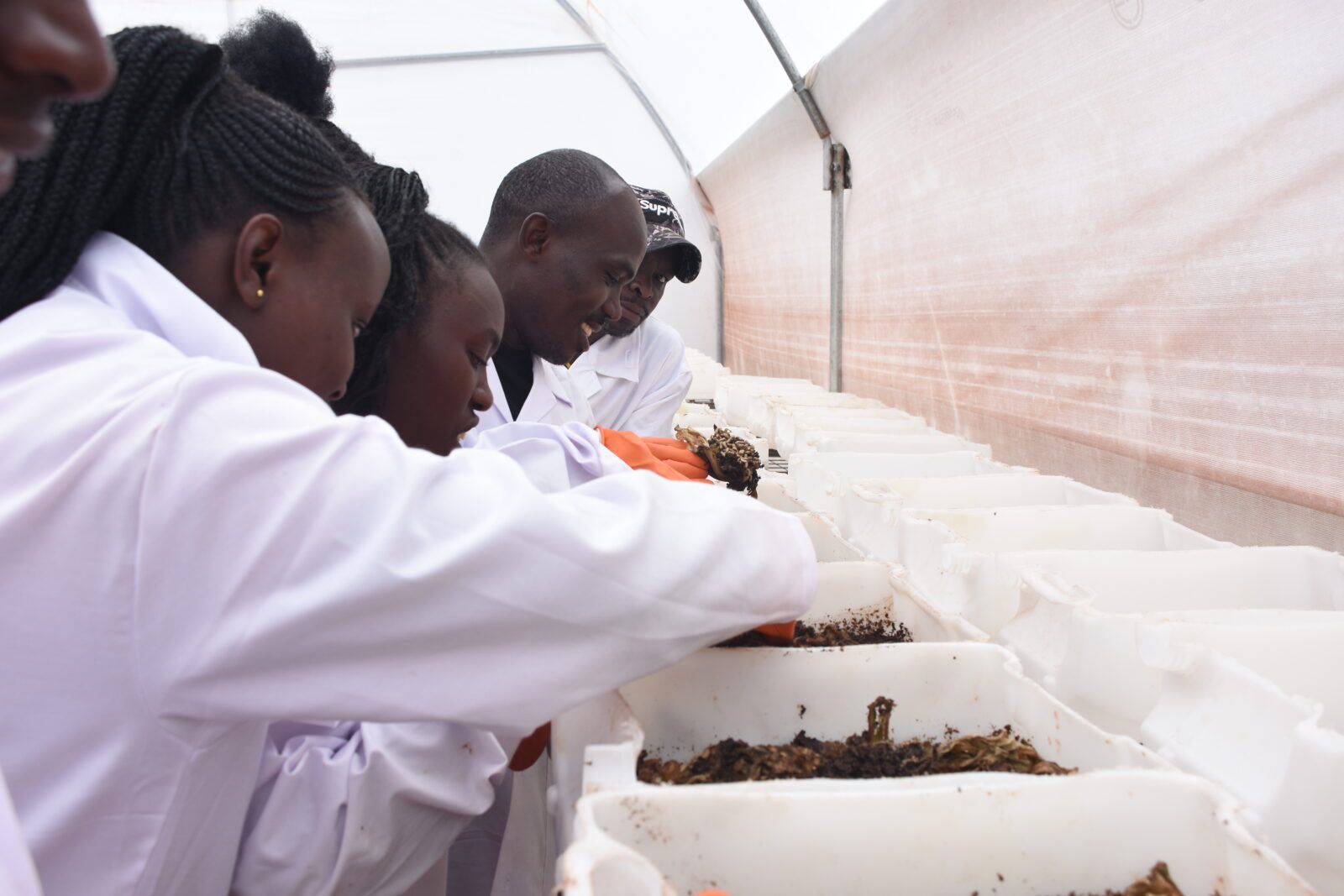 “When I was growing up in Kenya my parents always said if I didn’t work hard in school, I would live a poor and dirty life like that of a farmer,” the Rainforest Alliance’s Isaac Ogongo said. “During my school days, farming was considered one of the harsh forms of punishment.”

Ogongo is far from the only young Kenyan brought up to view farming in such a negative light. And in fact, many would-be young farmers in Kenya are turning to careers in other fields—which is concerning, since Kenya’s economy relies on agriculture and a whopping 75 percent of its population is under the age of 35.

To head off a potential dearth of farmers in the future, the Rainforest Alliance has launched a project to provide young farmers in Kenya with the support, hands-on experience, and market access they need to farm in ways that are both profitable and nourishing to the land. Ogongo, who helps lead the Future Farmers initiative, is excited to show young people that more sustainable farming can be “profitable, cool, and sexy.”

It all starts with a demo farm

In fact, farming needs young people. More tech savvy and innovative than their predecessors, young farmers in Kenya—and globally—are poised to transform agriculture in ways that can sustain future generations. The Rainforest Alliance hopes to eventually scale the Future Farmers pilot into a chain of youth-led farms around the world.

For now, the idea behind Future Farmers is to think big, but start small. Future Farmers begins with a one-acre demo farm in Kagio, Kenya, where everything is an opportunity for experimentation and growth. This program helps youth overcome the barriers to farming in multiple ways: by providing access to buyers under the Future Farmers brand; by introducing crops that have short grow cycles, have increased demand, are suitable for small plots of land, and have a low and/or positive environmental footprint; and by providing end-to-end supply chain support and training to ensure products reach the market.

Scroll on for a look behind the scenes at our demo farm.

Meet the young farmers in Kenya leading the way

Two things to know about the Future Farmers supervisors, Pramila Mwibanda and Moses Waweru Njogu: that they share a passion for sustainability and have been key in setting up and running the demo farm. Soon, they’ll begin training and coaching youth who would like to start their own enterprises under the Future Farmers label.

Mwibanda, a horticulturalist, is excited to help bring this concept to life. “For me, Future Farmers is a groundbreaking concept that truly embodies what youth in agribusiness are seeking,” she said. “At the same time, it tries to curb the real challenges that they face.”

As a microbiologist and ‘agripreneur’ from Nairobi, Njogu has vast experience in farm management, horticultural and hydroponic farming, and ecosystem management for regenerative agriculture. “With Future Farmers, I hope to inspire the next generation of farmers and demystify the perception that farming is not profitable and cannot be a source of employment for youth.”

Mushrooms were the first Future Farmers crop that hit the market. In the early days of the demo farm, it took some tweaking to achieve the right climate for growing fungi. Now, the mud huts our team built help regulate the air flow and temperature to be just right.

Diverse market players in Nairobi, Zucchini Markets, and JKUAT University, are among the first buyers of Future Farmers brand mushrooms. When some of the mushrooms were too big or had coloring that the buyers rejected, the team quickly pivoted. Cutting and drying the mushrooms in small slices made the products desirable once again for the local markets.

The future is hydroponics

Did you know that hydroponics uses 90 percent less water than conventional farming? Hydroponic farming is a method in which plants are not grown in soil, but instead in nutrient-enriched water. It’s a promising way to build climate resilience by allowing farmers to depend less on rainfall. Not only does hydroponic lettuce grow faster (four to five weeks as opposed to three months in soil!), but more production per square foot means it’s a great way for young, small-scale farmers to increase their incomes. Plus, it puts less pressure on the surrounding environment. Because most pests live in soil, hydroponic farming requires no synthetic pesticides.

We call that a win-win-win-win. In our hydroponic greenhouse, the Future Farmers team members have planted nearly 800 African leafy greens and lettuce seedlings. Their initial training taught them all the big and small details of hydroponics. While the team started with African leafy greens, lettuce, and microgreens, there is plenty of flexibility to adjust to local market demand in the future.

According to Forbes, increasing meat production to meet the demand of the growing global population isn’t a viable long-term solution. Turning to other sources of protein, like insects, is a more affordable and sustainable alternative. Crickets, for example, can be turned into flour and used in baking. (Don’t dismiss a cricket cookie until you’ve tried it!)

In the spirit of testing future agricultural alternatives, the team decided to try cricket rearing. We built a set-up that mimics the crickets’ natural living conditions with egg cartons for the pinheads (baby crickets) to nestle in. Since we’re always looking for ways to make the Future Farmers concept less cost-prohibitive for young people, we’ve made it common practice to reuse kitchen materials to decrease expenses. We also use upcycled oil containers as incubation trays for the black soldier fly (BSF) larvae.

Don’t let the appearance of BSF larvae deter you: They are some of the most beneficial insects for regenerative agriculture. For livestock farmers, protein-rich BSFs are a valuable and cost-efficient feed alternative to soy, maize, or fish meal. This means they have an important role to play in fighting deforestation and fish depletion. And since BSFs eat biowaste, they help prevent methane from entering the atmosphere.

A few times per cycle, the Future Farmers team sifts out the BSF larvae’s excrement (called frass), a nutritious, organic replacement for synthetic fertilizers. Due to the skyrocketing price of fertilizers, local farmers are grateful for the cheap and soil-friendly alternative.

The proof is in the chicken eggs

If you aren’t already impressed by the usefulness of BSF larvae, we have one more story for you. Ogongo said that his parents, who run a small chicken yard, gifted his son with a hen named Jonelle. Jonelle had a history of laying between 18 and 20 eggs every four months, but once she began a diet of BSF larvae, her production increased to 47 eggs—which were all equal sizes and had extra strong shells.

When the team received Paulette the chicken as a gift from one of the demo farm’s test week participants, they knew it was time to put Isaac’s hypothesis to the test. Going forward, Paulette will be on a strict diet of BSF larvae to see if it increases the quality and quantity of her eggs, as it did for Jonelle.

Led by passionate young farmers in Kenya, the demo farm has already been a rich and informative learning experience—and we’re hoping it’s just the beginning. Next, we’ll offer a “trainee week” as an opportunity for our eight accepted applicants to get a good understanding of Future Farmers and their cohort before diving into this long-term partnership. We aim to sign an agreement for microgreens with four young farmers at this time. From there, we’ll onboard interested farmers in other future crops and agricultural alternatives. Keep an eye out for future updates from the Future Farmers team as they continue to grow.