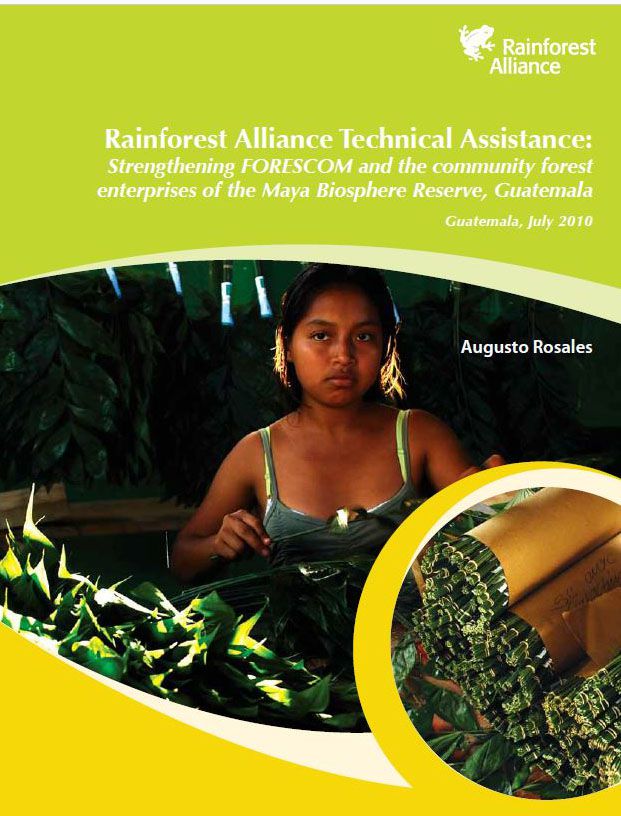 Strengthening FORESCOM and the Community Forest Enterprises of the Maya Biosphere Reserve, Guatemala

Before the Maya Biosphere Reserve (MBR) was established in the Petén in 1990, the area was plagued by illegal logging, which focused on removing only the most valuable tree species, such as mahogany. At the same time, civil conflict and displacement resulted in significant in-migration to the region, sparking extensive conversion of forests for agricultural use. The MBR has a Core Zone of protected areas (national parks and “biotopes”) a Multiple Use Zone, where forest extraction was legalized through forestry concessions, and a Buffer Zone for other land uses meant to relieve pressure on forest areas.

In 2003, the Community Forestry Services Enterprise (FORESCOM) was launched, formed by a group of eleven community forest concession organizations.

Between 2005 and 2008 Rainforest Alliance provided technical assistance to FORESCOM on production lines, sawmilling techniques, inventory and cost control, and general business strategy. RA also acted as a liaison with prospective buyers seeking certified products. Working together with a range of partners, Rainforest Alliance has leveraged funds and other assets to support additional investments, designing and implementing policies and practices for effective and integrated administration of natural resources. Assistance has also helped with business planning for marketing timber and non-timber forest products (NTFP), as well as overall promotion of value-added processing.

FORESCOM and its member enterprises have generated over 400 permanent jobs annually, directly benefiting over 10,500 persons and indirectly over 70,000. This has given concession holders and their families an improved quality of life, greater household stability (most salaries are above the minimum wage established by Guatemalan law), access to education and healthcare and significant improvements for community development. Ecologically, forest cover within MBR’s Multiple Use Zone has remained nearly intact, in contrast to the protected areas of the MBR, where the reduction of forest cover has been dramatic. Several recent land-use change analyses have revealed a significant reduction in deforestation in the Multiple Use Zone since 1997, which can in part be attributed to the community concessions’ annual expenditures of about $200,000 in monitoring and surveillance, investments made possible by profits from forestry operations.