Home » In the Field » Towards Sustainable Landscapes: Strengthening Forest Management and Promoting Income Diversification In an Indigenous Community 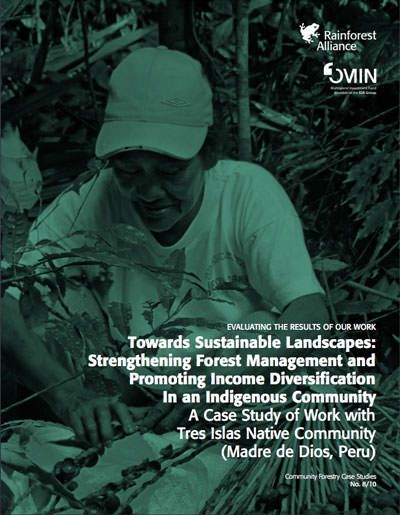 The last two decades have seen a marked shift towards decentralized forest management in developing countries. Upwards of 30 percent of forests in the tropics is now under some form of local control (RRI 2014). Most of this area is located in Latin America, where rights devolution in countries like Brazil, Guatemala, Honduras, Mexico, Nicaragua and Peru has been happening for decades. But the trend is increasingly taking hold in parts of Africa and Asia as well. Lessons from the experiences of community-managed forests in the Americas are therefore of critical importance.

Those experiences are decidedly mixed. Mounting evidence shows that community forests can perform as least as well as strict protected areas in conser-ving forest (Porter Bolland et al. 2012). At the same time, it is clear that managed forests can power economic development via locally driven enterprise (Molnar et al. 2012). Several case studies in this MIF-supported series also demonstrate such potential benefits. Yet it is also increasingly evident that without strong government support and local capa-city to defend rights, there may be increased risk for forest conversion (Stevens et al. 2014). As has been widely documented, such conversion often undermines community institutions, livelihood strategies and climate resilience (Sunderlin et al. 2005).

The Peruvian Amazon forms an important case in this regard. Since the 1990s, more than a quarter of the region has been titled to indigenous communities. Forest cover outcomes have been highly variable. In some places, such as the San Martín region, up to half of newly-titled indigenous forests were lost between 2000 and 2010, some of the highest levels of deforestation in the entire Amazon. In other places, forests have stayed relatively intact. Overall forest loss inside indigenous lands was lower than the deforestation rate across the Peruvian Amazon over the last decade, though much higher than in the region’s protected areas (RAISG 2012). While proximity to roads is the factor that appears to have the most influence over deforestation rates, it is also clear that both government support and community capacity to defend their forests is critical.

This case study profiles work undertaken by the Rainforest Alliance together with the indigenous community of Tres Islas, in the Madre de Dios region of southeastern Peru. Like other “native communities” in Peru, Tres Islas has seen considerable deforestation since its title was issued, above all due to mining. Based on the community’s desire to defend its territorial rights, halt deforestation on its lands, and harness its considerable natural resource base to improve community well-being, the Rainforest Alliance engaged in a three-year process with Tres Islas to improve resource governance and community forest enterprise.