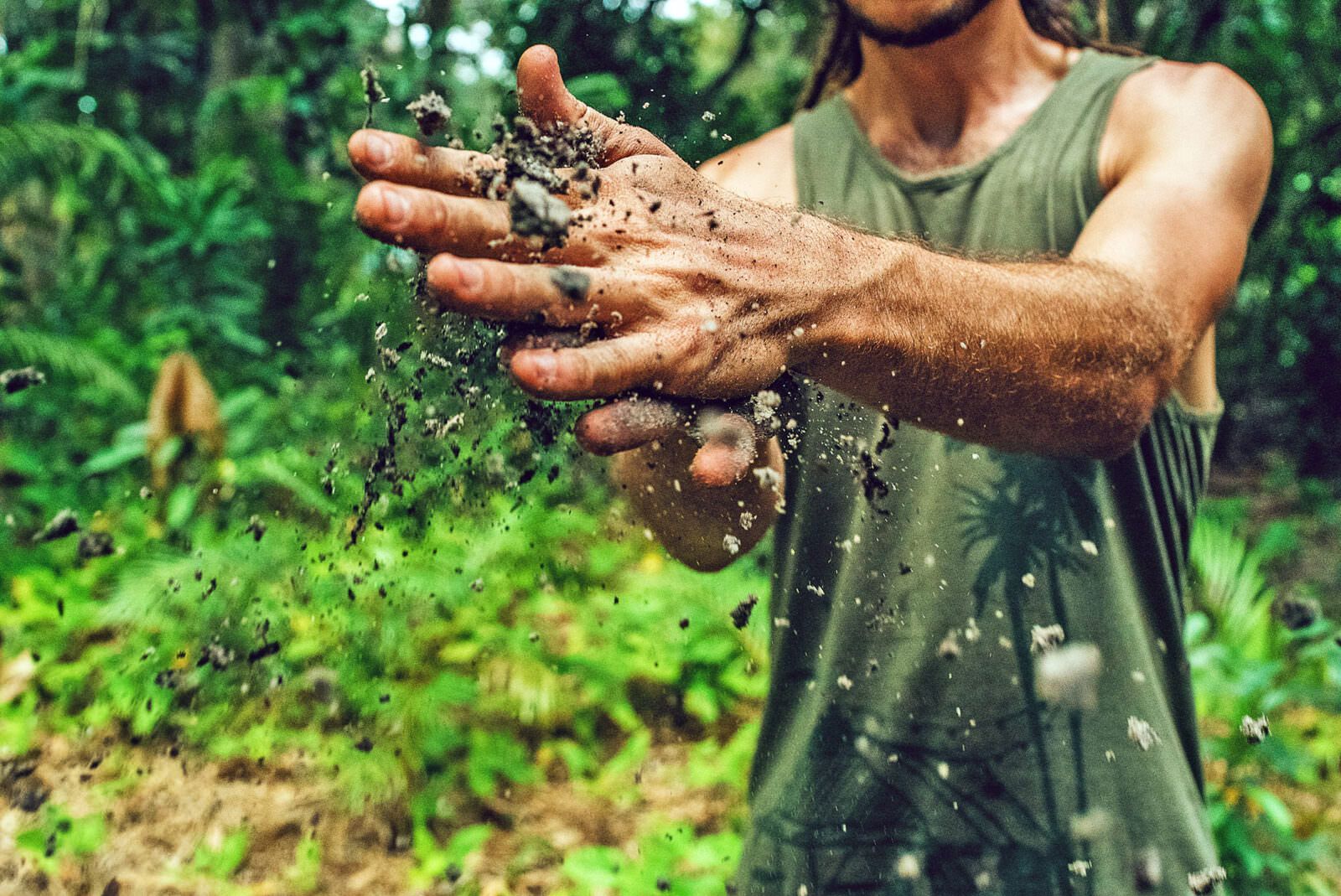 It pains me to say it, but it’s true: Of all the world’s vital natural resources, soil is the least sexy. Folks who get hot and bothered about forests, water, and wildlife glaze over when you mention soil—despite the fact that all terrestrial life depends on it.

As someone who holds a B.S. in soil science (yes, it is a thing. And yes, my parents were *thrilled* about me choosing that major) I’d like to think such people just don’t know enough about soil to appreciate it. Once you scratch the surface, soil is a subject that almost universally inflames passion.

Ready to become smitten by soil? Here are seven facts about soil that will change how you look at it forever.

Within minutes of sitting down to my first Soils 101 class, the professor abruptly asked, “Can anybody tell me what soil is?” My inner monologue went something like this: “What do you mean what soil is? It’s just soil… right?” And then, with increasing panic, I thought, “OMG, I am majoring in soil science and I can’t even explain what it is.”

After a few brave students offered up some inadequate guesses, the professor patiently explained that soil is a natural body made up of minerals, air, water, organic matter, and living organisms. It is the interface between the atmosphere and bedrock. Distinct soil “horizons” transition from the nutrient-laden topsoil that teems with life, all the way down to mere crumbled rocks beneath. Soils are infinitely diverse, morphing based on their parent material (underlying rock), local climate and topography, and the plants, animals, and fungi that inhabit them. Without soil, the Earth’s land would be a lifeless slab of rock.

Back when my Soils 101 professor was explaining to us what soil is—a date I prefer not to disclose—scientists were just beginning to understand to what degree living organisms play a part in soil health. Recent research has revealed that soil has a microbiome, much like the microbiome we now know inhabits our own digestive systems. In fact, there are more soil microorganisms in a teaspoon of healthy soil than there are people on the Earth.

These multitudes of soil organisms interact with plants in fascinating ways scientists are only now discovering. For example, researchers have found that communities of trees are interconnected by an underground network of mycorrhizae (fungi that live symbiotically between and within plant roots). These hidden networks transfer not only water and nutrients between plants, but also chemicals that allow the plants to communicate with one another in a natural “internet” that is critical to forest ecosystems survival. Yes, you read that right: plants have their own internet.

If you are a gardener, you may have already noticed that spending time with your hands in the soil can have a calming effect. It turns out that it’s not just the cathartic release of ripping weeds out of the ground that is lifting your spirits—soil microbiomes may also contain antidepressants.

What we currently know about the soil microbiome is just the tip of the iceberg. There are no doubt countless wonders yet to be discovered right under our feet.

As soil is alive, soil can also die. And we humans have been killing a lot of soil. The short-term gains of conventional agricultural practices—like excessive tilling and application of chemical pesticides and fertilizers—eventually give way to reveal the long-term damage they do to soil ecosystems. Perhaps the most infamous example of this is the American Dust Bowl of the 1930s, when poor land management led to the degradation of 100 million acres of once-fertile grasslands, and the displacement of more than a half a million people. Years of extensive deep ploughing and replacing deep-rooted native prairie grasses with cash crops killed the living networks that had kept the soil moist and held it in place. When severe droughts hit the area, winds lifted away more than 75 percent of the topsoil in many areas of the Great Plains in choking “black blizzards.” In spite of the Dust Bowl, farmers still rely largely on tillage and chemical fertilizers and pesticides to keep their crops alive, and in doing so continue to destroy soil ecosystems.

A lesser-known but equally harmful cycle of soil degradation is happening in the tropics, where forests are slashed and burned for cattle, soybean, and oil palm production. There’s a tragic irony to clearing rainforests for agriculture: the soils that live beneath rainforests are extremely poor. All the nutrients are locked up in the forests themselves, so once they are burned and the nutrients from their ashes are used up, farmers are left with utterly useless soil. So on they go to the next patch of forest: raze, plant, deplete, repeat—annihilating both soils and forests in their wake.

4. Soil is a non-renewable resource

Soils form through the slow physical, chemical, and biological weathering of bedrock. Depending on the nature of the rock and other local factors, that weathering can take up to tens of thousands of years to form a mature soil. This means that on the scale of a human lifetime, soils are a non-renewable resource. And soil erosion from wind, water, and poor agricultural practices can wipe away thousands of years of soil formation in a matter of moments.

Rainforest Alliance Coordinator for Sri Lanka (and soil lover) Giri Kadurugamuwa points out that it takes hundreds of years to create an inch of soil whereas, “to lose one inch of soil, it won’t take a minute.

A massive amount of carbon is stored in the soil—approximately 75 billion tons of carbon in European Union soils alone—in the form of plant and animal material in various stages of decay. When natural grasslands and forestlands are converted to cropland, and each time that cropland is tilled, some of the soil carbon is released into the atmosphere. Soil erosion is also a significant, yet largely overlooked contributor to carbon emissions.

6. Well-managed soil can take tons of carbon out of the atmosphere.

Now for some good news: soil has the potential to offset 5 to 15 percent of the global fossil-fuel emissions. Practices like woodland regeneration, no-till farming, manuring and compost application, and cover cropping not only pull carbon out of the air and lock it underground, they restore degraded soil and even increase crop yields. Also known as “regenerative agriculture,” these soil carbon sequestration techniques are Drawdown’s #11 of 100 solutions for reversing global warming.

There is admittedly no substantive difference between soil and dirt. Dirt is simply soil that is in the wrong place. When it gets on your shoes, your kitchen floor, or under your fingernails, soil suddenly becomes “dirt.” Cut off from its ecosystem, dirt is no longer a productive member of society, but a nuisance to be swept away. The difference between these words is a matter connotation, but to me it’s a distinction worth making. So next time the subject comes up, use the word “soil” instead of “dirt.” And if you’re in a didactic mood, use the opportunity to strike up a conversation about some of the fascinating things you’ve just learned about this vital natural resource.

You have the power to protect soil.

If you are a farmer or serious gardener, please check out our training video on soil conservation and management, and farmers can consider getting Rainforest Alliance Certified.

Others can support farms that protect soil by looking for products that bear the Rainforest Alliance Certified seal. The Rainforest Alliance Sustainable Agriculture Standard requires certified farms work to minimize soil erosion and compaction, improve soil fertility, and reduce the use of pesticides by applying integrated pest management techniques. Or you can take your commitment even further by supporting our efforts to make farming more sustainable in some of the world’s most critical ecosystems.

I hope that by now you’re head-over-heels for the humble stuff right under your feet. Share that passion with others, and let’s get soil the admiration it deserves.