How Are More Sustainable Bananas Grown? 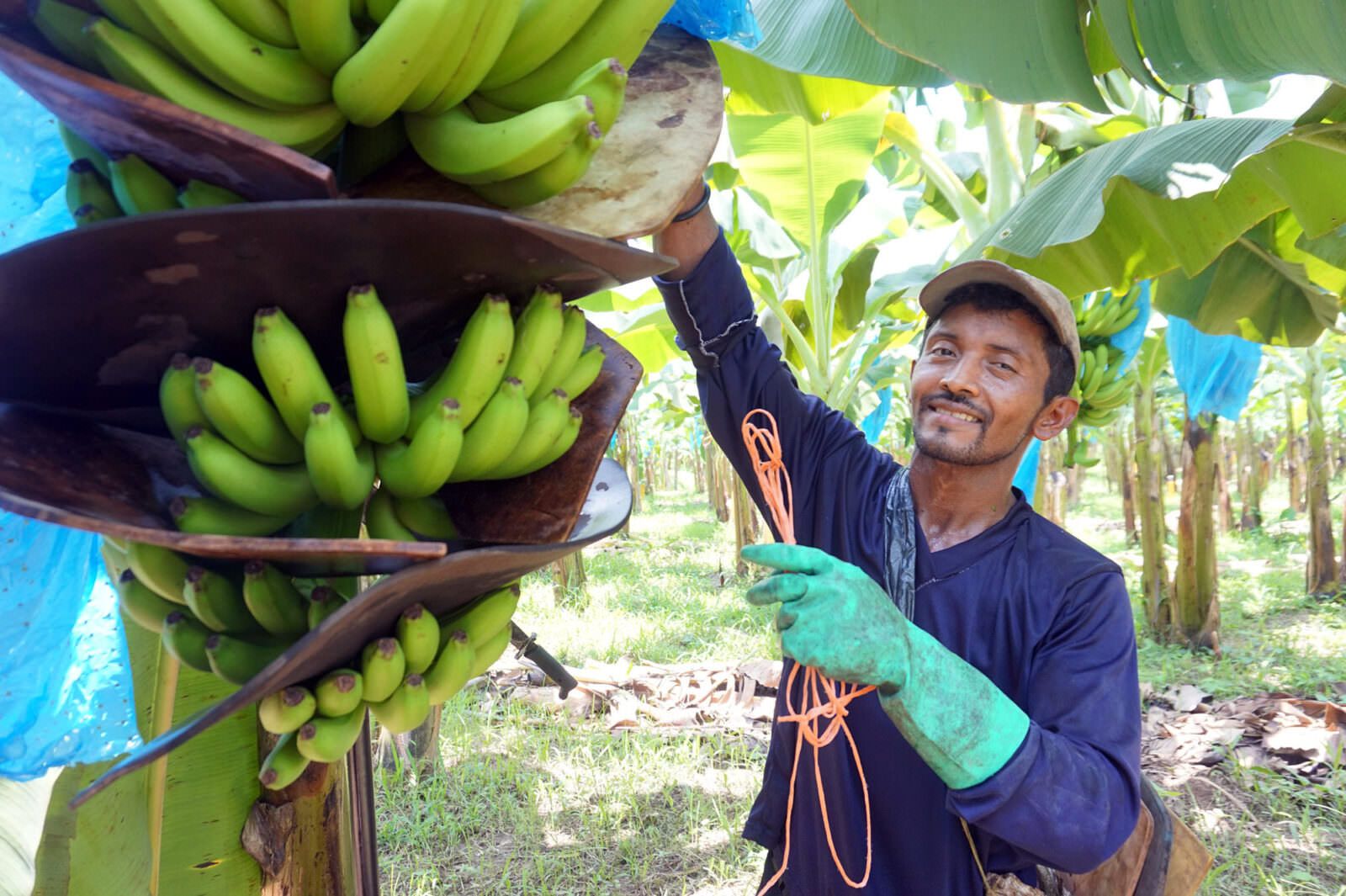 Standing on a platform overlooking a Rainforest Alliance Certified banana farm in Costa Rica, all you see is green. The wide leaves of the banana plant stretch for miles into the distance, waving gently in the humid breeze. Purple banana flowers and bunches of green bananas hang down from the plants. In the haze of the tropical afternoon, the farm is a deep, almost iridescent green. Springy groundcover carpets the space in between the rows of banana plants.

This certified farm is a stark contrast to other banana farms. On conventional farms, groundcover is typically killed with harsh chemical herbicides, leaving soil exposed. Heavy agrochemical use and bare soils are just two of many destructive practices on conventional banana farms. For nearly 100 years, banana farms in Latin America were infamous for their disregard for their workers and the environment. Workers threw the plastic bags used to protect growing bananas into streams—or worse, the bags were burned. Agrochemicals from farms washed into rivers, streams, and eventually, the ocean, killing coral reefs and poisoning marine life. Banana plantation owners often denied workers the right to organize and kept wages shamefully low. Companies cut down tropical rainforests to make way for vast fields of banana plants.

Decades of worker abuse and environmental destruction from intensive banana farming was one of the main reasons the Rainforest Alliance formed. In the 1990s, we began to work with scientists, local NGO partners, communities, and farmers to transform this destructive industry by establishing the first standard for responsible banana farming. And while the industry overall has improved its practices, conventional farms continue to place yield above all else in order to meet the global demand for bananas.

On Rainforest Alliance Certified banana farms, yields are also a priority—but worker well-being and the health of soil, nearby forests, and waterways are considered equally important—and essential to the long-term sustainability of the farm. For example, that green groundcover on the certified farm in Costa Rica may seem insignificant, but in fact it’s a proven, climate-smart method to prevent soil erosion during heavy rains and hold moisture in the ground during droughts. Although maintaining groundcover means farm works have to pull noxious weeds by hand, this initial investment in labor pays long-term dividends to the farmers by decreasing herbicide use and its associated costs.

Cutting down on herbicide use also reduces agricultural runoff in local rivers and streams. Perhaps most importantly to farmers, caring for soil boosts the productivity and longevity of banana plants, thereby reducing farm operating costs. Most conventional banana farms replace their plants every few years to keep farm productivity stable, but this certified farm in Costa Rica hasn’t had to replace its plants in 30 years. As a result, the productivity of the farm is consistent year after year.

Climate-smart farming practices like these are becoming increasingly important throughout the tropics, where climate change has led to higher temperatures, droughts, and erratic rainfall—something consumers in the North American and European markets should consider when choosing which bananas to buy at the grocery store.

How do bananas grow?

Clustered at the base of most banana plants, at all stages, are groups of baby banana plants popping up from the stem of the mother plant. Workers choose one daughter banana plant to grow and eventually replace the mother plant. In nine months, a mother banana plant will bear fruit—just like humans, as farmers like to point out. A pinkish purple flower the size of two fists will appear at the top of the banana’s “trunk” (really a sheath of leaves packed tightly together). As the flower grows, its petals peel back to reveal layers of tiny “hands,” or clusters of bananas. Workers are careful not to let the fruit grow too big, or harvest it too early—harvesters carry a caliper to make sure only fruits that fall into a narrow size range are harvested.

At harvest time, workers slice through the thick stem of the fruit before cutting the plant down. A banana farmer wields his machete like a sushi chef, swiftly slicing the stem into pieces before spreading them into a shallow ditch in between the rows of bananas plants, where they will compost into organic matter. This composting is another climate-smart practice, one generally not practiced on conventional banana farms. Using organic fertilizer, either by leaving green matter to decompose into the soil or by applying compost, is a central tenet of the Rainforest Alliance Sustainable Agriculture Standard, and a way to cut farm costs while keeping the soil moist and fertile.

Crisscrossing the banana fields is an ingenious transport system—simple metal arches with a central line running down the tunnel. Hooks dangle from this central line, from which workers hang freshly-harvested bunches. When all the hooks are full, the workers put on a harness and pull the bunches back to the central washing and packing plant.

With incredible speed, workers (mostly women) at the central packing plant separate the bananas for export from those destined for the local market or other products, such as baby food. Bananas for export go into tubs of water, where they’re washed. The leftover water runs through three grates, filtering out any particles or chunks of banana. This is a special measure Rainforest Alliance Certified farms take to ensure only clean water is returned to the fields.

After three washings, the bananas are lifted onto conveyer belts, air-dried, stickered, and packed into boxes. At the certified banana farm in Costa Rica, those blue plastic bags that covered the bunches in the field are also brought to the central packing plant, where they are recycled into plastic straps that help the boxes keep their shape during the long journey to your local   store. From there, the green bananas, protected by their thick skins, are loaded onto conveyer belts, into trucks, then onto cargo planes, finally to large port cities where they’re distributed to retail stores.

Rainforest Alliance Certified bananas are the end product of the long chain of more responsible actions taken by farmers, companies, retailers, and finally, consumers. Taken individually, these actions may not seem significant. But the sum total of these everyday actions is the transformation of an industry that has historically wreaked destruction on the environment and communities.