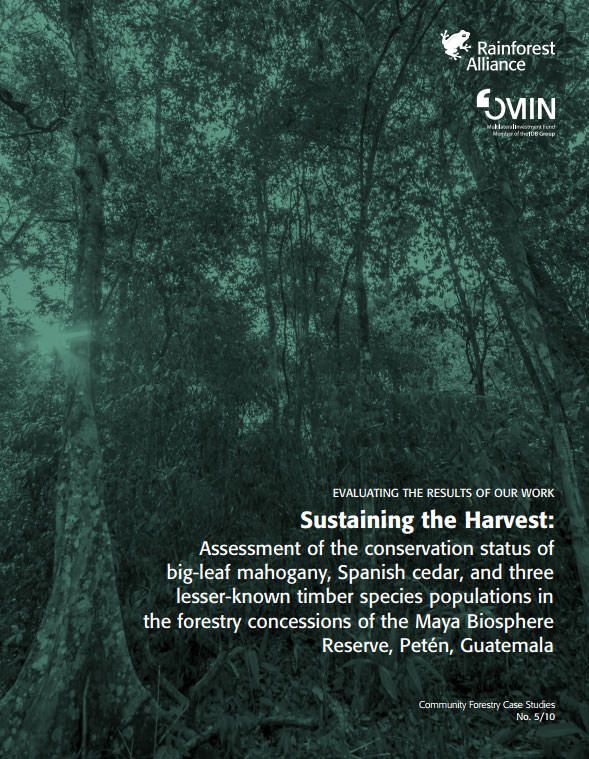 Sustaining the Harvest in the Maya Biosphere Reserve

Ensuring the sustainability of forest harvesting is a cornerstone for developing competitive community forest enterprises (CFEs). Without continued availability of the forest products upon which an enterprise relies, there can be no adequate long-range planning or growth, nor can any economic or conservation benefits be reasonably sustained. While many CFEs collect data on forest growth, relatively few have the capacity to incorporate such data into management planning and silvicultural approaches. Even fewer have the capacity to undertake detailed assessments of the impacts of forest harvesting on timber species population recovery and future commercial production. This case study documents the findings of an investigation carried out in the forestry concessions in the Maya Biosphere Reserve (MBR) in the department of Petén, Guatemala, assessing post-harvest population and production recovery of the five timber species that sustain the region’s CFEs, as well as two industrial concessions.

Covering close to 2.1 million hectares, the MBR is the largest protected area in Central America and home to about 180,000 people, as well as globally important biodiversity and cultural heritage. Established in 1990, the reserve is also the site of an internationally significant example of multiple-use forest management with the twin aims of conservation and social development. The MBR is divided into three different zones allowing for varying degrees of resource management: (1) the Core Zone (36% of the reserve), consisting of national parks and “biotopes,” allowing only for scientific research and tourism; (2) the Multiple Use Zone (40%), in which low-impact natural resource management activities are allowed, and; (3) the Buffer Zone (24%), a 15-kilometer band along the southern border of the MBR, where a range of land management activities, including agriculture, are permitted.

In the Multiple Use Zone (MUZ), usufruct rights were granted by the Guatemalan government in the late 1990s and early 2000s to 12 community organizations and two private industrial firms to manage for timber and non-timber forest products. The decision to allow for concessions was a controversial one, since many doubted the ability of production forestry—particularly in the hands of community groups—to conserve natural forests. In order to achieve and maintain the concession contract, forestry concessions are required to comply with the standards of the Forest Stewardship Council®. The Rainforest Alliance, among other local and international organizations, has been supporting the concessions since their establishment. In addition to the current project funded by IDB/MIF, significant support has come from USAID.

Some fifteen years after the majority of concessions were awarded, the conservation status of five of the most important timber species—big-leaf mahogany (Swietenia macrophylla), Spanish cedar (Cedrela odorata), manchiche (Lonchocarpus castilloi), pucté (Bucida buceras), and santa maría (Calophyllum brasiliense)—was analyzed. Analysis was based on available inventory and logging data, as well as extensive field-based data collection in eleven concessions. Species’ population recovery during cutting cycles after harvests was evaluated using variable modelling approaches developed with the most up-to-date scientific knowledge. The core finding of this study is that timber harvesting in the MBR is sustainable, and in fact represents state-of-the-art best practice globally for species-level management in tropical forests. At present levels of harvesting, populations of commercially important timber species are expected to recover initial commercial densities and volumes during cutting cycles between successive harvests, on average. Such a finding, backed up by scientifically rigorous, field-based empirical data, sets the MBR apart from most other commercial forestry operations in the tropics.

This conclusion is particularly notable given that a majority of the concession area is under the management of communities whose capacities to implement sustainable forestry have been and continue to be questioned, both in Guatemala and across the tropics. The fact that community-based enterprises—working together with government and technical assistance agencies—are practicing better forest management than highly capitalized industrial firms operating in other parts of the tropics is a globally important finding. This is being achieved, moreover, in a context where deforestation pressures are notably high. The MBR model thus deserves recognition and replication in other tropical countries, particularly as greater areas of natural forest are coming under local control.