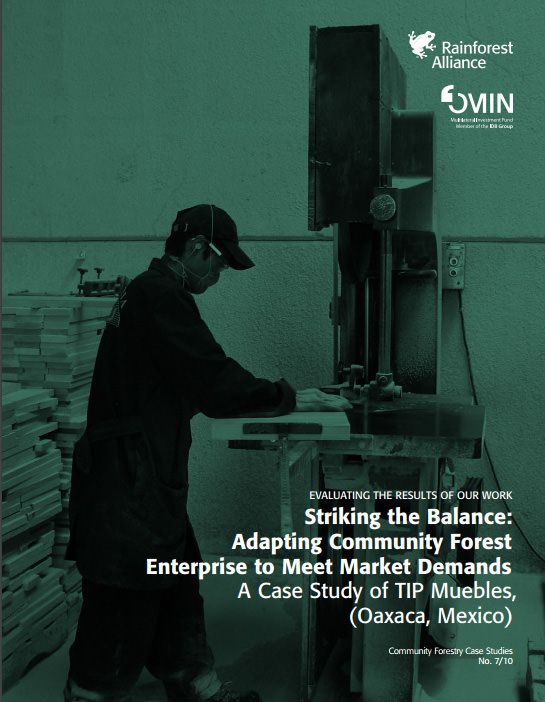 Mexico is characterized by a strong community forestry sector. The Mexican Revolution (1910-1917) introduced an agrarian reform process implemented in successive waves during the 20th century. Over a period of 70 years, lands nationwide were titled to two types of rural communities—ejidos and indigenous communities—which now collectively hold an estimated 60.3 percent of the national forest estate. The National Forestry Commission of Mexico (CONAFOR) has identified roughly 9,000 communities who are forest owners, perhaps a third of which have negligible commercial potential (Madrid et al. 2010). Among those communities that have a more sizeable forest resource, over 3,000 manage their forests in accordance with a management plan.

Over the past two decades, a transition to greater autonomy in forest management has been consolidated. Communities throughout the country have extended traditional governance institutions in innovative ways to administer a growing diversity of community forest enterprises (CFE). They have also created complex inter-community alliances to generate economies of scale and undertake joint ventures. Numerous analyses show that successful CFEs substantially contribute to local development, and that community forest management is as effective as protected areas in conserving natural forests and their services (Bray et al. 2007).

Nevertheless, making small-scale forestry an economically competitive land use alternative remains challenging, even in a country like Mexico, where community forestry is relatively advanced. To compete with cheap wood imports, not to mention illegal material, community forest enterprises in Mexico need to achieve economies of scale, add value to forest products, and institutionalize sound entrepreneurial practices.

A popular strategy for accomplishing this is the creation of second-tier organizations that aggregate production from multiple communities, enable value-added production, and help communities improve quality control, marketing, and administrative processes. But achieving efficiency for such second-tier organizations is difficult. Challenges include tensions between egalitarian values and entrepreneurial demands, competition between member communities, and competition between the second-tier business and its own member communities.

This case study analyzes TIP Muebles, a retailer and brand name owned by ICOFOSA, a consortium of indigenous communities in the southern Mexican state of Oaxaca involved in managing forests, logging, sawmilling, furniture manufacture, and furniture retailing. The central finding of this case study is that it is possible for a second-tier business to strike a balance between community values and market demands. The study also confirms that CFEs can adopt commercially viable business models while maintaining fidelity to values and processes rooted in community institutions.