The pink trumpet tree (tabebuia impetiginosa) is a species of deciduous trees in the trumpet-vine family ranging from northern Mexico to Argentina.

The term ipê refers to seven different tree species within the genus Tabebuia, each found in the tropical forests of Central and South America. These massive trees can reach heights of 150 feet, and are supported by a surprisingly narrow trunk. Ipê is not an evergreen, and drops its leaves before producing large clusters of beautiful flowers in colors including white, golden yellow, lavender, bright pink, and red.

Ipê is found in the tropical forests of Argentina, Bolivia, Brazil, Colombia, French Guiana, Guyana, Paraguay, Peru, Suriname, Trinidad and Tobago, and Venezuela. This type of tree is often found growing on river banks, in marshes, and atop ridges.

Ipê is a hard and resilient wood, often used in coastal environments. Its wood is also known for its resistance to attack by both fungi and insects, and holds a Class A fire rating—the same rating given to concrete and steel. It is commonly laid down for boardwalks and home decks, marina docks, benches, and railings. The hardest ipê comes from the Tabebuia serratifolia species, which is today primarily harvested and exported from Bolivia, after having been overharvested in Brazil. Several species of Tabebuia are also known for Pau D’Arco, a special herb extracted from their leaves and bark. For centuries, the extract has been sold as a tea and used by indigenous communities to treat a range of ailments.  While few scientific studies have been conducted, Pau D’Arco is believed to treat illnesses such as leukemia, allergies, diabetes, dysentery, and malaria.

Throughout much of the world, ipê has been overharvested—its wood used for outdoor building projects and construction in coastal environments. Many trees have also been stripped of their bark, renowned for its medicinal properties, leading to the eventual death of these trees.

The Rainforest Alliance has been working with community forestry operations that harvest ipê and other timber species to ensure that they follow a strict sustainable forest management plan. Located in Bolivia—where ipê is generally sustainably harvested and abundant—the Angel Sandoval Concession was one of the country’s first and largest businesses to become Forest Stewardship Council® (FSC) certified by the Rainforest Alliance. During the 1990s, Bolivia’s deforestation rate reached nearly 0.5 percent annually and the country lost 6.5 percent of its forest cover in a fifteen year period (1990 to 2005). Forest loss rates continue to increase: as of 2010, over 741,316 acres (300,000 hectares) of forest are lost annually, according to Bolivia’s national forestry agency. In the face of such rampant deforestation, it’s notable that, over the past decade, Bolivia has become a leader in tropical forest certification. More than 3 million acres (1.5 million hectares) of its forests are FSC-certified, making it the third largest FSC certifier in Latin America and the Caribbean. The success of FSC certification in Bolivia promises to help improve forestry practices and conserve the country’s globally significant biodiversity. 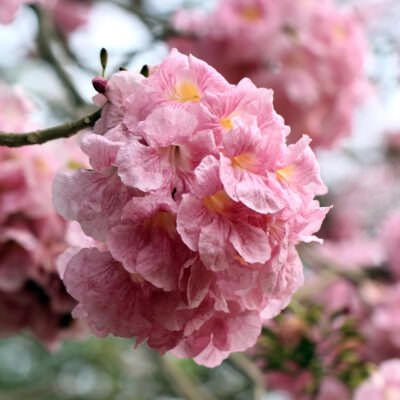 Fact Pau D’Arco—a special herb extracted from their leaves and bark—is believed to treat illnesses such as leukemia, allergies, diabetes, dysentery, and malaria.