It takes rubber trees about five years to reach maturity

In the wild, the rubber tree will grow to heights of 100 to 130 feet, and can live up to 100 years. Its most famous feature is the milky white sap, known as latex, which flows freely from the tree when a sliver of bark is removed. A rubber tree, also referred to as rubberwood, can be tapped for latex once it reaches approximately six years of age. In order to reproduce, the fruit of the rubberwood burst open when ripe, scattering its many seeds in an area spanning up to 100 feet from the tree.

Hevea brasiliensis is a species of rubberwood that is native to rainforests in the Amazon region of South America, including Brazil, Venezuela, Ecuador, Colombia, Peru, and Bolivia. These trees are generally found in low-altitude moist forests, wetlands, riparian zones, forest gaps, and disturbed areas. It is a quick growing tree, often the first to establish itself when a gap in the canopy is produced but may be shaded out as more trees fill in the canopy opening. Today, commercially-produced rubber can also be found throughout much of Southeast Asia and Western Africa.

Historically, cattle ranchers and rubber tappers have disagreed over the rights to clear forest land. Cutting down the forest is not only detrimental to the species that depend on that land, but also damaging to the people that earn a living by sustainably harvesting what the forest provides. Many indigenous people depend on these sources of income to provide for their families and communities.

Chico Mendes, a Brazilian rubber tapper, became famous when he organized the National Council of Rubber Tappers in Brazil to help protest against the clear cutting of land for cattle grazing. Thanks to his efforts, the union gained the support of the Brazilian government and was able to set aside crucial “extractive reserves” within Brazil. These reserves allow for the sustainable harvest of goods, such as rubber or nuts, and protect against the clear cutting of trees. In 1988, Chico Mendes was murdered for his work to create extractive reserves and protect the rainforest. His efforts have been carried on by his coworkers and supporters across the world. 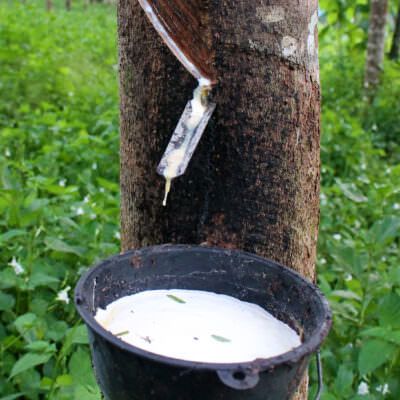 Fact First discovered by the ancient Olmec, Maya, and Aztec, the latex sap from the rubber tree was once used to make rubber balls, to waterproof clothes and even to form homemade shoes.