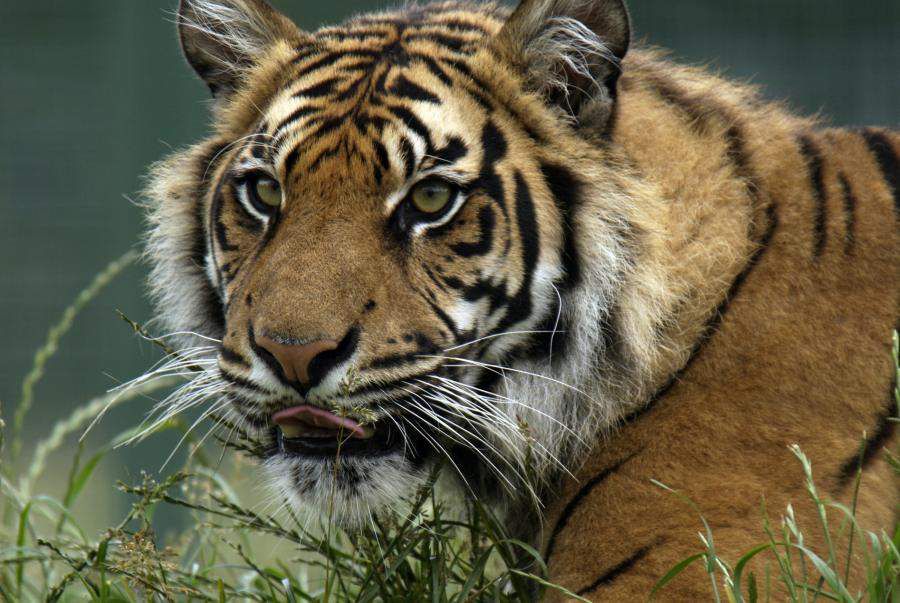 Indonesia is home to some of the last remaining primary rainforests, such as the lowland forests of Bukit Barisan Selatan National Park, a UNESCO World Heritage Site on the island of Sumatra. These forests provide essential habitat for the critically endangered Sumatran elephant, Sumatran rhino, and Sumatran tiger. But the park is threatened, in part by agricultural activities such as coffee cultivation, and more than 22 percent of its forest has already been lost. That’s why the Rainforest Alliance collaborates with farmers in the park’s buffer zone, to help them conserve biodiversity and improve their livelihoods.

These are the twin goals that motivate Intan Fardinatri, our coffee team manager for Indonesia. Since 2018, she has been working with one thousand coffee-farming households in the buffer zone, showing them that more sustainable practices—such as planting shade trees—can protect wildlife while also boosting their incomes.

Although local farmers have grown coffee, cocoa, and other crops in the buffer zone for decades, the land officially belongs to the Indonesian government. Working with the government’s appointed forest managers, the Rainforest Alliance has helped smallholders obtain social forestry licenses from the Ministry of the Environment and Forestry, which allow them to continue farming there for at least 35 years.

In exchange, farmers must meet certain requirements, such as conserving wildlife and maintaining forest cover. “That means protecting rivers and waterfalls, reporting illegal logging to local authorities, encouraging ecotourism, and developing a deeper appreciation for the natural world,” says Fardinatri. If they fail to meet these expectations, their licenses could be revoked.

Planting and nurturing trees in the buffer zone

To support farmers in their role as forest guardians, Fardinatri and her team have provided training and worked with them on a variety of initiatives. From 2020 through 2021, farmers planted 45,000 trees in the area that directly borders the national park, as part of a larger tree-planting project in Sumatra’s Lampung Province that added an additional 55,000 trees.

The choice of trees that were planted was carefully made, with each species having a specific purpose. Some native trees, like bitter bean, nutmeg, and dog fruit, provide shade cover for coffee plants, while others—such as avocado and durian—were selected for their ability to generate additional income for farmers. And pollinator-friendly species, like Arenga pinnata (sugar palm), help to ensure a steady supply of nectar for bees. As part of these efforts, some of the farmers also participated in birdwatching training and were provided binoculars and field guides to record species and locations.

The most recent planting activity took place in March and April of 2022, along with training on how to manage human-wildlife interactions, which was led by one of our NGO partners. While the number of seedlings planted was smaller than in previous years, you could say that this time their goal was bigger—elephant-sized to be exact.

After identifying 80 farms that are part of a wildlife corridor used by the Sumatran elephant, farmers were asked to plant species the elephants enjoy—for the animals’ benefit, of course, but also to help farmers understand that they share their land with these elephants. “It’s not that [farmers] don’t belong there,” says Fardinatri, “but the elephants were there first, so they should take it easy when the elephants eat some of their plants.”

From 2021 to early 2022, the Rainforest Alliance teamed up with Indonesia’s University of Lampung to conduct a participatory biodiversity assessment in an 800-ha area of the park’s buffer zone. Together with lecturers from the university’s science department, farmers learned how to spot wildlife and record their sightings, as well as to conserve biodiversity that could help their farms.

Initially, farmers were asked to write down the local names of each species they spotted and where they were seen, but the scientists were able to collect even more data and photos when farmers were given a digital tool that they could use on their cellphones. At the end of the assessment, the university published a book documenting these efforts, featuring about 100 verified species (out of a total of 300 recorded). The book was shared not only with the farmers themselves but also with the provincial government.

Conserving Indonesia’s unique biodiversity has benefits for farmers, too

The assessment served several important functions, including helping farmers meet the requirements of their social forestry licenses and establishing a baseline that the government can use to evaluate how well farmers continue to conserve biodiversity. It also provided farmers with a wider perspective on their farms and their role in protecting wildlife. “They go to their farms every day, but it’s not every day they are observing what’s there [beyond their crops],” says Fardinatri. “Some species may be harmful or dangerous, but some are actually beneficial for the farm.”

Finally, the assessment was also designed to promote tourism, helping to attract visitors to observe rare species like Rafflesia arnoldii, the largest known individual flower in the world (also known as the “stinking corpse lily” for the foul insect-attracting odor it emits). Farmers identified and inventoried multiple plots where the flower was growing, and when actual tourists came to see the plant, farmers led tours of their land, providing coffee and food for visitor meals. In exchange, they were paid for their work and got to see another way that conserving biodiversity can generate economic value.

Over time, these activities have produced many positive impacts, including intangible ones. There is a notable difference between farmers who have received training and support, and those who have not. “The groups that solely depend on regulation [to conserve biodiversity in Indonesia], they get their permit, and then they have to do it mostly by themselves,” says Fardinatri. “While there have been some projects and technical assistance offered, it has not been enough to provide everyone with guidance on how to maintain shade trees, diversify their income, become climate resilient, etc.”

It’s a different story among those who have teamed up with the Rainforest Alliance and our partners. “When we invite outsiders to visit—like the scientists and tourists—it gives farmers an opportunity to interact with people who are appreciating their work. Appreciation can lift their confidence and increase their motivation,” says Fardinatri. “They are the true guardians of this forest. I’m hopeful that through collaboration and innovation, we can protect Indonesia’s precious ecosystems and support the communities who depend on them.”