Home » Insights » What Is Regenerative Agriculture? 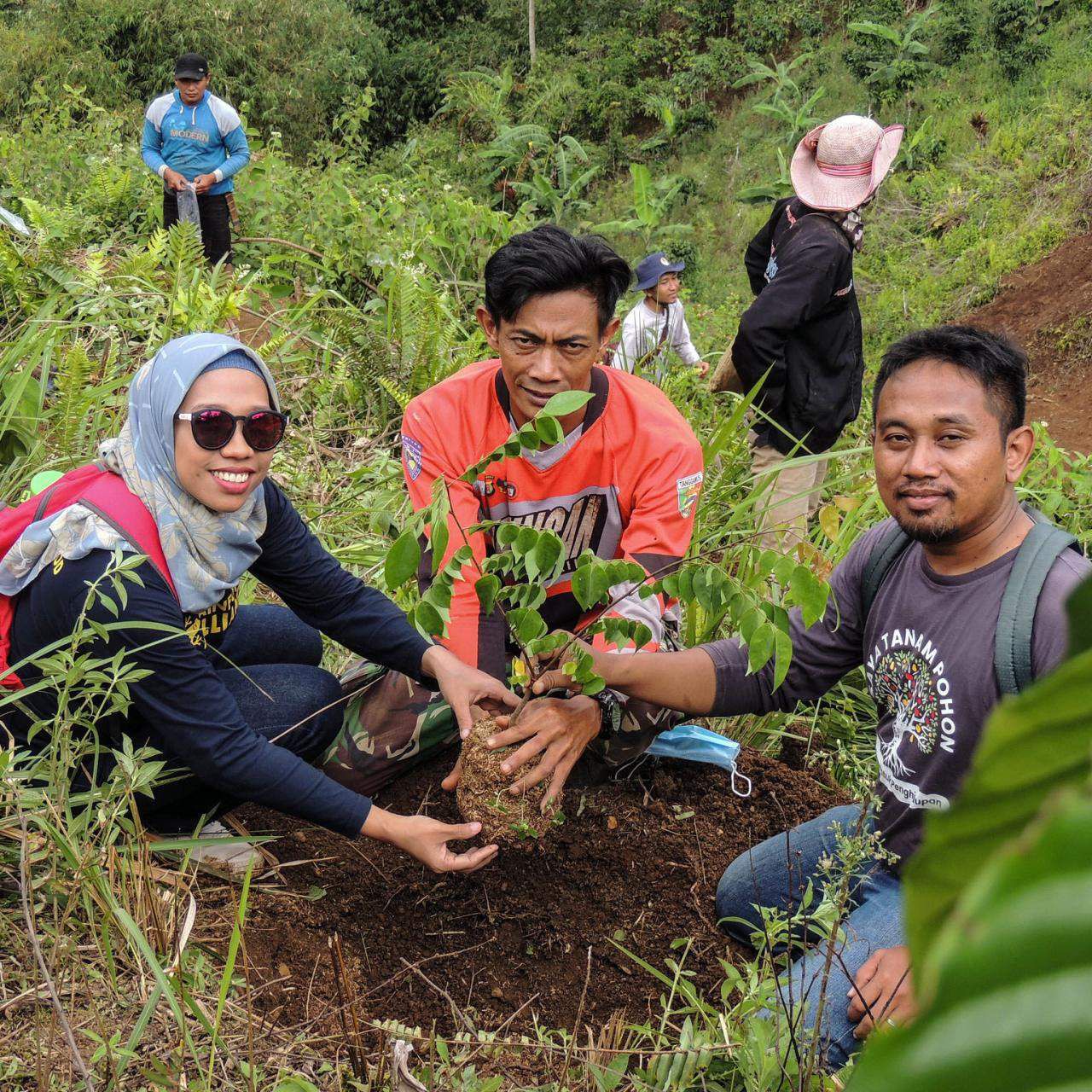 If you feel like you’re suddenly hearing the word “regenerative” all the time, you’re not wrong. The concept has gained considerable traction in the last year, although it’s not new to the Rainforest Alliance.

For more than 30 years, we’ve worked to make agriculture more sustainable by partnering with farmers all over the world to use growing methods that protect the land. We consider sustainability to be a journey—and for us, the final destination is regeneration.

In other words, sustainable farming is a harm-reduction approach—a crucial first step on the path toward creating an overall system that actually adds to nature’s richness. A farmer can begin by reducing external inputs like pesticides, for example, and eventually enhance the health of her land so much pesticides aren’t needed at all. When measures to enrich land—such as planting shade trees to protect and nourish soils—are applied on all fronts, you have yourself a regenerative farm.

In light of the UN’s recent report on global biodiversity—and its alarming findings that the world has failed to meet a single target to stop environmental destruction—we can’t be content with merely curbing our negative impacts on land: We must redesign farm systems to enhance biodiversity and store carbon in the soil. One million species are at risk of extinction, in part because of ecosystem destruction—often called “land-use change” or “conversion”—and agriculture is the primary driver of that destruction.

In the tropics, where the Rainforest Alliance works, there are more species per square meter than in northern latitudes—so when rainforests are cleared for farming, the number of species lost is higher. Conventional farming methods like the over-application of fertilizer and pesticides set off an additional chain of negative effects on these precious ecosystems.

Here at the Rainforest Alliance, regenerative agriculture falls under a climate-smart umbrella, because in order to reach a point where farms are truly regenerative, one has to take into consideration the ever-increasing impacts of climate change. What’s “smart” about climate-smart agriculture is that the specific climate threats—whether they be droughts, flooding, or rising temperatures—for a given region, crop, or even farm, determine the methods to respond to these challenges.

Here are some areas in which the Rainforest Alliance promotes regenerative agriculture:

Many of us think of iconic wildlife when we think of biodiversity—and indeed, all animals are necessary for nature’s balance, which is why the Rainforest Alliance Certification Program prohibits hunting on farms. But the tiniest creatures, such as the 200,000 species of pollinators (e.g. birds, bats, and bees) are also vital to ecosystems and food production. Agroforestry, which is the practice of cultivating crops amid native trees, and establishing wildlife corridors are two powerful ways of boosting all-around biodiversity.

The 1,000-hectare Aquiares Estate Coffee in Costa Rica, which sits between the country’s largest protected area and a volcanic mountain range, is a stellar example of how farming practices designed to boost biodiversity and nourish soil can restore the overall health of an ecosystem. General Manager Diego Robelo says that since the farm began its sustainability transformation with the Rainforest Alliance 17 years ago, it has gone from using a full-sun monoculture approach to cultivating coffee under the shade of native trees.

As the largest Rainforest Alliance Certified coffee farm in Costa Rica, Aquiares has been a pioneer in applying regenerative principles on a grand scale, planting more than 50,000 trees and effectively connecting two important wildlife corridors. Now the farm boasts 76 different native tree species and 140 bird species—103 of which hadn’t been seen before Aquiares began working with the Rainforest Alliance.

Riparian buffer zones—strips of land alongside waterways on which vegetation and trees are planted—are required in our certification program, as are a host of other water conservation measures designed to prevent erosion in local streams and rivers. In the cocoa-growing Juaboso-Bia region of Ghana, deforestation and climate change had caused a vital local river to dry up for several months of the year. A collection of 36 cocoa-farming communities that the Rainforest Alliance works with there formed a land management board, which planned and executed the planting of native trees on riverbanks. The farmers also introduced other water and soil conservation practices, and the river began to flow year-round again.

Climate-smart agriculture helps farmers adapt to a changing climate by identifying their particular climate challenges—such as new weather patterns, shorter growing seasons, droughts, or heavy rains—and finding the right methods to overcome them. This kind of targeted adaptation helps farmers build resilience to the harmful impacts of climate change: A study of Colombian coffee farmers showed that in a year of adverse weather and abundant fungal infestations, certified farmers only lost 1 percent of their yield while a control group lost 52 percent.

What’s more, climate-smart agriculture help fight climate change, since healthy soil—a clear benefit of regenerative practices—can act as both a carbon pool (reservoir) and carbon sink (a mechanism that removes greenhouse gases from the atmosphere). In fact, soil is the biggest terrestrial carbon pool on the planet—even bigger than what we call pythomass, the total amount of living organic plant matter on Earth.

Crops that are compatible with agroforestry offer additional climate benefits: Not only does tree cover improve biodiversity and crop quality, it’s another way to fight global heating, since trees pull carbon out of the atmosphere.

The process of reaching an herbicide-free farm exemplifies the journey from sustainable to regenerative agriculture. Mahendra Peiris, an innovator in herbicide-free weed management used on Rainforest Alliance Certified tea farms in Sri Lanka, explains that the first year of this approach requires a substantial investment in labor. Workers extract noxious weeds and leave the beneficial ones to proliferate and enrich the soil with nitrogen (the noxious weeds are composted into fertilizer). By year two,  the labor is less intensive because the flourishing soft weeds keep the noxious weeds away. By year three, crop yield can increase as much as 20 percent, and farmers save on costs since they no longer need to buy herbicides. The end result: richer soil, thriving tea bushes, and healthy streams and rivers.

Leaving those harmless weeds also helps protect the earth from direct sunlight and retain soil moisture—which is good for crops. Other measures we promote to improve soil health include building up soil organic matter, increasing nutrient recycling, and improving the soil’s capacity to absorb and retain water.

Because this holistic approach to managing weeds (as well integrated pest management) is such a potent tool for improving the health of the land, it is a critical focus of Rainforest Alliance certification and trainings.

The well-being of those who work the land is key to any regenerative farming system—and that means, in part, improving crop productivity and incomes for farmers. A recent study disproves the longstanding belief that enhancing biodiversity on farms compromises yields, and in our work we have found that yields actually improve. In the Junin region of the Peruvian Andes, researchers found that a Rainforest Alliance Certified coffee cooperative increased its annual production, which led to an additional US$280 per hectare in net coffee revenue for certified farms. Studies have found that higher yields generally lead to higher incomes on certified farms, and certified crops often fetch higher market prices. Robelo of Aquiares farm says the quality of the estate’s coffee has improved, which allows them to sell it for more.

The Rainforest Alliance also helps smallholders strengthen their farm-management and business practices in order to improve household incomes. An important part of that, for the Rainforest Alliance, is bringing women into the equation: Experts say that women, who make up 43 percent of the agricultural work force in developing countries, are key to food security and the fight against climate change. Finally, we recognize that responsibility for improving livelihoods must be shared across the supply chain so that the risks, costs, and burdens of sustainable production do not fall on farmers alone.

We work with farmers around the world who have demonstrated that agriculture has great potential to have positive impacts on biodiversity and climate. “Nature has been very forgiving so far,” Rainforest Alliance agriculture expert Juliana Jaramillo says. “But that’s changing. We’re seeing signs that it may not come back from our abuse. That’s why it’s no longer enough to reduce our harmful impacts—we have to improve the health of the Earth. And agriculture offers a wonderful opportunity to do so.”

What is Sustainable Agriculture?