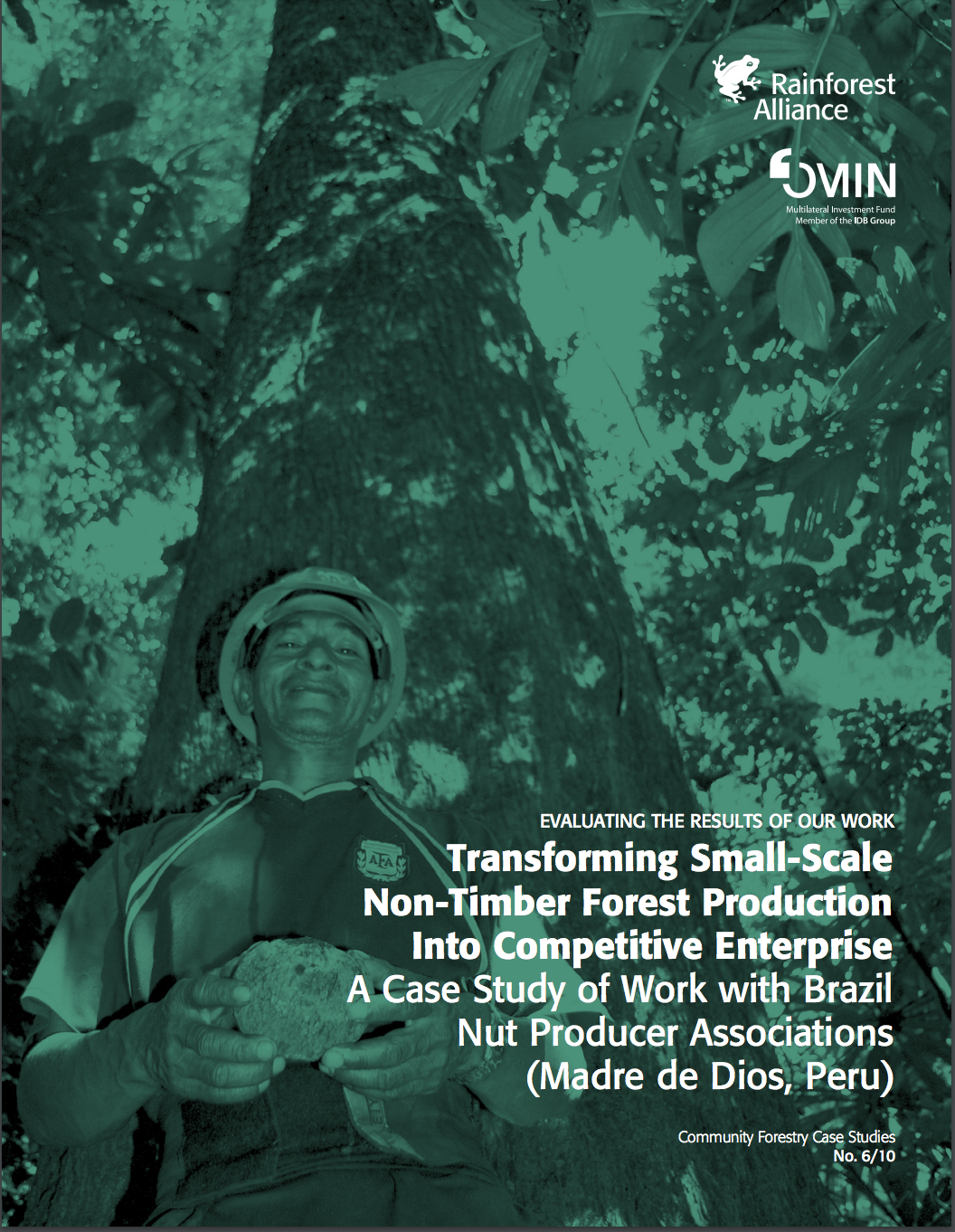 The Brazil nut is one of the world’s most widely consumed non-timber forest products (NTFP). It is also one of a relatively small number of globally traded commodities that is helping to save threatened forests. Harvested from the fruit-fall of giant Bertholletia excelsa trees, Brazil nut extraction involves little more than collection of pods (‘cocos’) from the forest floor, a practice which has been found to increase the abundance of Brazil nut trees across the landscape. Unlike other well-known nuts like almonds or cashews, Brazil nut cannot be grown in plantations; harvesting can only be sustained in closed canopy Amazonian rainforest. Thus the Brazil nut industry is a linchpin of forest conservation strategy across its range.

The scale of the industry in the Madre de Dios economy is significant. In 2014, a total of 4,300 metric tons of shelled Brazil nuts were exported from the region, corresponding to nearly US $31 million in sales. Approximately 15,000 people, or almost 12.5 percent of the population of the Madre de Dios region, are directly employed in the Brazil nut industry. For most people involved, activity around Brazil nut accounts for more than half of family income. Significantly, nearly a third of the concession holders are women, and women also make up a disproportionate share of the labor force in the processing industry.

In a region with one of the highest deforestation rates in the world, the conservation of biodiversity-rich natural forest through harvest and sale of a single non-timber forest product (NTFP) stands out as a compelling counterpoint. Yet pressures to convert Madre de Dios’ forests for mining, ranching or plantation development continue to mount. One of the chief strategies to hold back such pressures is to increase the economic competitiveness of the enterprises that rely on maintenance of the natural forest.

For over a decade, the Rainforest Alliance has been working in Madre de Dios with a range of partners to strengthen forest resource management and enterprise to ensure the conservation of the region’s extraordinarily biodiverse rainforests. Support for this work has come principally from USAID and the present MIF project.

A cornerstone of the Rainforest Alliance’s forestry work has been assistance to various partners and organizations in the Brazil nut industry. This case study examines work with three organizations of Brazil nut harvesters, known by the acronyms for their names in Spanish: AFIMAD, ASCART and RONAP. Together these three organizations represent 259 people who are involved in the sustainable management of 89,501 hectares of rainforest. The three organizations represent very different groups of people and face a diverse set of challenges, but all have managed to improve forestry practice, social organization and enterprise administration with technical assistance. The case study focuses on ASCART as it experienced the most significant change over the period of analysis, and since its experience can be taken as an example for other Brazil nut producer associations in the future.

The central finding of this case study is that small-scale NTFP producers can form second-tier enterprises that can achieve financial viability and significantly improve incomes for members. Furthermore, such improvements can be achieved over a relatively short period of time, as long as there is dedicated support from numerous partners, and that support focuses on building solid foundations for good enterprise governance.