What Are Natural Climate Solutions? 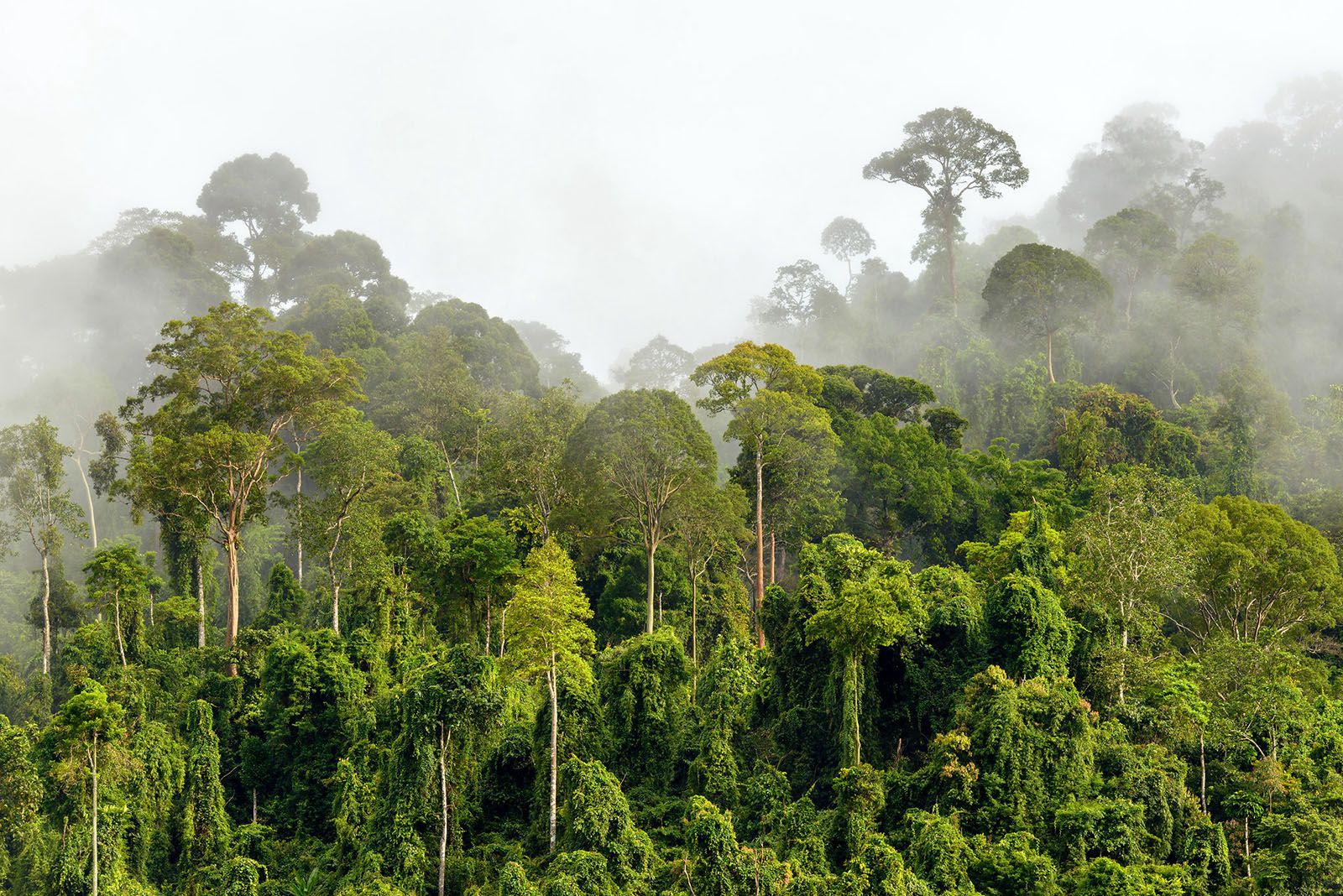 Scientists on the UN International Panel on Climate Change (IPCC) have issued a clear call to the world: to avoid a global climate catastrophe, we must cut worldwide carbon emissions nearly in half by 2030 (the threshold beyond which global temperatures would rise more than 1.5 degrees). Those same scientists concluded that natural climate solutions—such as thriving tropical rainforests and climate-smart agriculture—can help us achieve 37 percent of the necessary reductions.

While much of the world’s attention is focused on reducing fossil-fuel use (which generates roughly 90 percent of human emissions)—scientists have reminded us that nature-based approaches are essential to the global climate solution.

So what exactly are natural climate solutions? Here some examples, beginning with one that’s at the core of our mission.

The Rainforest Alliance was formed 30 years ago to stop tropical deforestation—a goal that scientists affirm is critical to staving off a global climate emergency. The power of forests to store carbon dioxide through the process of photosynthesis is staggering: One tree alone can absorb an average of about 48 pounds of carbon dioxide from the air in one year, which means entire forests can trap significant amounts of carbon dioxide. A new analysis estimates that better management of forests alone (stopping deforestation, restoring forests, and improving forestry practices) could remove 7 billion metric tons of carbon dioxide annually (the equivalent of eliminating 1.5 billion cars—more than all of the cars in the world today).

Our focus is tropical forests, which absorb even more carbon dioxide and evaporate more water than any other kind of forest, producing a thick cloud cover that reflects sunlight back to space. By some estimates, tropical forests capture about half of all carbon dioxide absorbed on land. Aside from their remarkable carbon-storage capacity, trees are also critical to climate stability because of their critical local cooling capacity–equivalent to the power of more than 2 air conditioning units per tree.

There is a downside, however, to all this carbon storage: If trees are felled, they release it back into the atmosphere. When humans destroy forests, they leave felled trees to rot on the forest floor or burn them, creating even more emissions. All told, deforestation on its own causes about 10 percent of worldwide carbon dioxide emissions. If tropical deforestation were a country, it would rank third in carbon dioxide-equivalent emissions, only behind China and the United States of America. For this reason, protecting standing forests has even greater climate benefits than planting trees.

Our global team works in partnership with rural communities, companies, governments, and other nongovernmental organizations to advance proven forest conservation strategies in the Amazon, Central America, Congo Basin, and Indonesia. We work to keep forests standing by advancing sustainable agriculture and community forestry, building rural prosperity and economic stability to stop deforestation and fires before they start.

At the heart of the Rainforest Alliance mission is the foundational understanding that people who make their living from the land have the most incentive to protect it. We work hand-in-hand with communities to build the kind of thriving, sustainable rural economies that are essential to safeguarding forests, stabilizing our climate, and protecting wildlife. This approach is exemplified by our deep collaboration with a group of 11 communities in Guatemala’s Maya Biosphere Reserve forest concessions; together, we have developed a model of successful community forest management for the entire world, proving that strong and well-organized communities are a powerful natural climate solution.

Having won the right to manage areas of land within the reserve as part of the country’s 1996 Peace Accords, our partner communities have maintained a near-zero deforestation rate in their concessions for 15 years—a remarkable achievement given that nearby protected areas suffer some of the worst deforestation in Mesoamerica. And this year, for the first time since data collection began in 2000, a new report found that these communities have not only avoided deforestation, they have achieved net forest recovery in some areas by regenerating 371 hectares of forest on their lands. It’s important to note that the communities could not have achieved this remarkable result without the support and collaboration of local government and national policy makers—as well as responsible businesses that buy their products.

Indigenous leadership is another crucial natural climate solution. Indigenous people manage roughly a quarter of the Earth’s land, safeguarding 80 percent of the world’s terrestrial biodiversity. Research shows that Indigenous peoples achieve conservation results at least equal to those of government-run protected areas—with a fraction of the budget. Another study shows that from 2000 to 2012, the annual deforestation rates inside tenured Indigenous forestlands across the Amazon were 2-3 times lower than outside of them. The message is clear: Indigenous peoples know best how to protect the forests we need so badly to fight climate change. Since our founding, the Rainforest Alliance has partnered with Indigenous peoples who have established the ultimate best practices in stewarding Earth’s natural resources responsibly.

We’ve worked with Indigenous communities in the Madre de Dios region of the Peruvian Amazon, for example, to develop small businesses based on the harvest and processing of Brazil nuts (which grow naturally in the rainforest). Instead of selling raw nuts for low price to middlemen, as they once did, our partner communities now export more than 4,000 metric tons of packaged, shelled nuts and nut products in a single year—at a value of nearly US $31 million. Since they make a good living from the forest, communities are deeply invested in protecting the 80,000 hectares (197,000+ acres) of forest they manage.

The Rainforest Alliance works with millions of farmers all over the world to promote sustainable and climate-smart practices and improve livelihoods—both of which are critical to building farm resilience and stopping deforestation. Conventional farming methods degrade land, eventually making it unsuitable for growing and increasing the pressure to encroach into nearby forests in search of untouched, fertile earth. Unfortunately, that’s just a temporary solution, since that land will also become infertile over time.

For farmers to be able to sustain their businesses over the long term, they must avoid depleting their land. Sustainable agriculture methods are designed to nourish soil health, conserve water, and increase crop yields on existing farmland (higher yields, in turn, boost income and reduce the economic pressure to expand farms into nearby forests). Those same farming techniques also build climate resilience. For example, rotating different types of cover crops—plants grown in the off-season to prevent soil erosion—improves soil quality and yields, and can store half a ton of CO2 per acre. Mulching with organic materials keeps moisture in the soil, a function that is becoming increasingly important as a guard against extreme heat and drought.

Given the carbon-capturing power of forests, reforestation (planting trees on deforested land) and afforestation (planting trees on land that previously had no forest) offer significant potential climate gains at relatively low cost. The Rainforest Alliance worked with more than 250 smallholder coffee farmers in Santa Lucía Teotepec, a rural area in Oaxaca, Mexico, for nearly five years to launch an innovative reforestation project that culminated in 2015, when the farmers earned validation from one of the most rigorous greenhouse gas accounting programs in the world, the Verified Carbon Standard (VCS). The Oaxaca CO2 Coffee project was one of only about 100 VCS-validated projects in the forest and land-use sector worldwide—and one of very few that did so through reforestation activities (versus avoiding deforestation). Through reforestation, the project has the potential to remove 130,000 metric tons of emissions from the atmosphere over 30 years—equivalent to the annual emissions of about 27,000 cars.

Planting shade trees in and among crops—a practice called agroforestry—is a natural climate solution that provides a host of environmental and agricultural benefits. Tree roots anchor soil, preventing erosion; fallen leaves and fruits decompose into an organic litter layer that enriches soil. Soils rich in organic matter hold more water—an important buffer against drought. And like all trees, shade trees planted on farms remove greenhouse gases from the atmosphere and reduce temperatures in their immediate surroundings.

In Ghana, we worked with 36 communities across a region of 29,000 hectares (71,600 acres) that, in addition to achieving Rainforest Alliance certification, planted 58,600 tree seedlings in degraded areas and more than 50,000 tree seedlings in and around their cocoa farms. Planting trees can help counter other climate impacts: a large river in this region had begun to go dry for parts of the year, but after the tree-planting, the river flows year-round again.

While the Rainforest Alliance works primarily at the intersection of forests and agriculture, there are other powerful natural climate solutions that can’t be ignored. Ocean-based climate action could deliver up to a fifth (21%, or 11 GtCO2e) of the annual greenhouse gas (GHG) emissions cuts needed in 2050 to limit global temperature rise to 1.5°C. Then there’s “blue carbon,” which is carbon stored or sequestered in the soil or biomass of coastal wetlands such as saltmarshes, seagrass meadows and mangrove forests. These can store up to four times more carbon than terrestrial forests per unit area.

Our global climate crisis has many faces—from the wildfires that tore through California wine country to water shortages in Capetown and flooding in Bangladesh. Our future climate stability depends on achieving net-zero emissions as quickly as possible, and natural climate solutions are essential to reaching that goal. The Rainforest Alliance is committed to protecting standing forests, making agriculture more sustainable, and improving the livelihoods of the rural people who depend on the land to live.