Home » In the Field » A Woman in Charge: From Cook to Community Leader

A Woman in Charge: From Cook to Community Leader 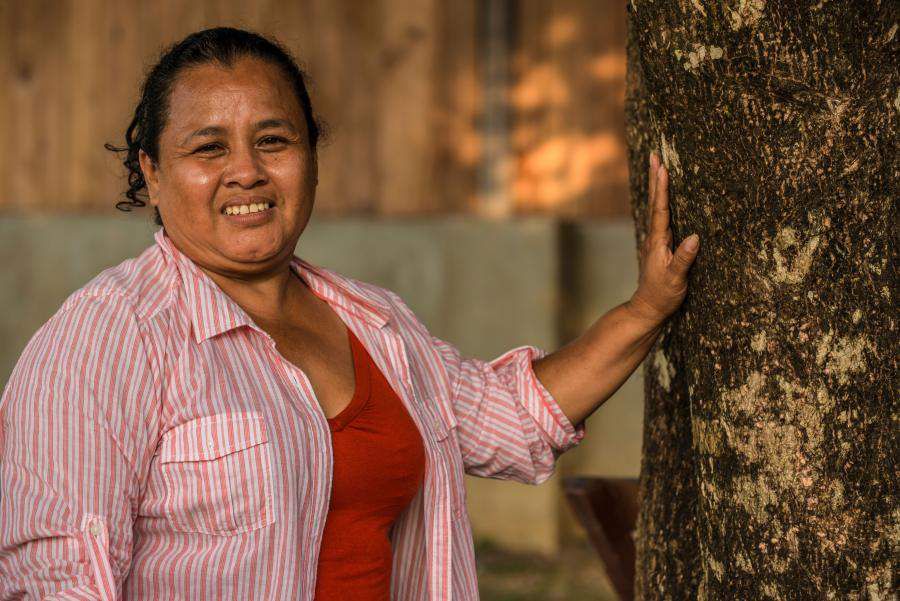 When Ana Elizabeth Centeno first learned that her community, which sits in the center of Guatemala’s Maya Biosphere Reserve, was considering a forest concession, she didn’t like the idea. “It’s against our tradition of living from non-timber products like xate, chicle and allspice,” she says. “I thought it would be the end of the forest as we knew it.”

Eighteen years later, both the forest and the community are thriving, and Centeno—who was widowed and left with four small children shortly after the concession was granted—has been able to support and educate her kids with her work in the concession. She’s also trained other women in the skills she’s acquired during her many years in sustainable forest management.

In 1998, in desperate need of work to support her four children, Centeno took a job preparing food for the forestry workers. But she soon proved herself to be capable of much more than that, and was put in charge of running the timber processing shop—a position that raised eyebrows at first. “The men didn’t accept me because I was strict. If you broke a tool, you had to give me the old one before I gave you a new one.” Undaunted by the resistance, Centeno continued to work in oversight and other areas of timber management.

In 2005, the Rainforest Alliance and a local conservation group, the Asociación de Comunidades Forestales de Petén (ACOFOP), presented the idea of working with xate, a palm frond widely used in floral arrangements (over 30m fronds are exported to the US and Canada for Palm Sunday alone). Centeno began assisting at the xate shop, but was running it in no time. “I trained 21 women to work with xate,” she said. “It wasn’t easy to convince the husbands to let their wives work at first, but we succeeded. I’m so happy to see how many women now can put a little money in their purses to buy whatever they like,” she says. “What I find satisfying is that all this labor, which used to go to the warehouses in [the nearby municipality of San Benito], is now staying here in the community.”

Centeno, who now manages social benefits for her community, credits the concession with many improvements. The money earned as a collective has provided 30 young people with scholarships to attend technical school or university. “We’ve even assumed the state’s responsibility to pay our schoolteachers, to provide first aid,” she said. “With the money we’ve earned ourselves, we’ve even saved lives. A girl was bitten by a (venomous) barba amarilla snake, and with the funds that we had as a community we were able to get a vehicle to transport her quickly to the center for treatment.”

Most importantly for Centeno, the forest concession has helped her improve her children’s lives. “I didn’t want them to suffer what I suffered,” she says. “I was able to give them associate’s degrees, purely from my work with the concession. Now they’re employed in the [nearby urban area]. I can say that I fulfilled my role as a woman and a mother because I was able to provide for my children.”

Community: The Secret to Stopping Deforestation in Guatemala