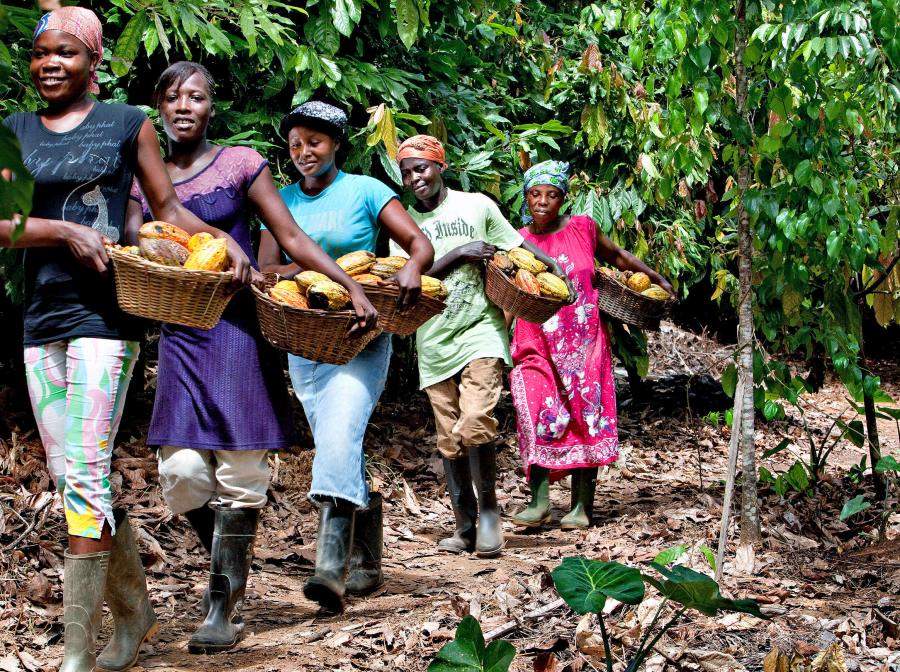 Seventy percent of the world’s cocoa comes from West Africa, where cocoa cultivation is a way of life reaching back for generations. Most of the cocoa throughout the region is grown by smallholder farmers who struggle not only with economic hardship, but also with the effects of climate change—hotter temperatures, unpredictable rainfall, and a shift in growing seasons.

Sustainable agriculture and community forestry are powerful strategies for conserving the abundance of natural resources in West and Central Africa. In addition to our work to conserve the forests of the Congo Basin, we partner with farming communities to build climate-resilient, sustainable agriculture landscapes.

A promising alternative has begun to emerge: the devolution of forest management to local communities... Continue Reading
Learn More

Collaboration is key to affecting change that will improve the lives of cocoa farmers and their families.... Continue Reading
Learn More

All resources for West & Central Africa

We train cocoa farmers to meet the challenges of climate change while also increasing productivity and securing decent living and working conditions.[Read more...]

Project Profile: A Regional Focus on Sustainable Timber Management in the Congo Basin

Central Africa contains the second largest expanse of contiguous moist tropical forest of the world. It represents 70 percent of the African continent’s forest cover and constitutes a large portion of Africa’s biodiversity.

In the Congo Basin, forests are home to roughly 30 million people and support livelihoods for over 75 million people from more than 150 ethnic groups.  In all of the six countries, forestry is a major economic sector, providing jobs and local subsistence from timber and...[Read more...]

Thanks to the exceptional richness of its forest ecosystems, Cameroon occupies the fifth rank in Africa in terms of biodiversity.

Although overall deforestation rates in the region are still lower than those in parts of the Amazon and southeast Asia, they have accelerated over the past few years, driven by the establishment of large-scale agricultural and mining operations. With the aid of government agencies, large firms have been seizing swaths of land in forested areas that were traditionally...[Read more...]

Towards Productive Landscapes: A Landscape Approach to Climate-Smart Agriculture in Ghana

Deforestation in the tropics is a significant cause of global climate change (Murdiyarso, Hergoualc’h and Verchot 2010). Where land conversion is fueled by commodity agriculture, it is imperative to
View:  END_OF_DOCUMENT_TOKEN_TO_BE_REPLACED

Published on January 23, 2015
Available in: English

Published on August 6, 2012
Available in: English